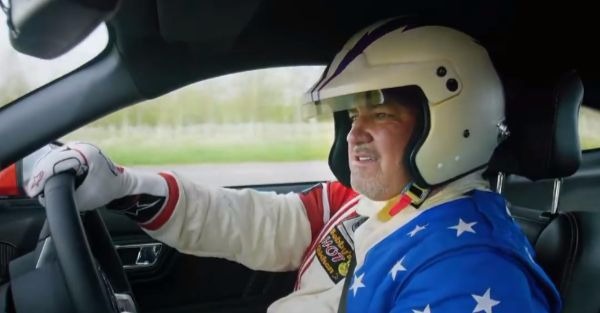 FINALLY! We love The Grand Tour, or most any TV program that revolves around cars. But there were some glaring issues with season one. What used to be a strong point of Top Gear, the hot laps with the headlining car driven by the Stig, followed Clarkson, Hammond and May from one show to the other, but with the most obnoxious of changes: The American.

Each regular episode had an entire segment devoted to the embodiment of Clarkson’s once amusing American stereotypes, played by 1995 NASCAR Truck series champion Mike Skinner.

The cringe-worthy dialogue left us rooting for the fastest lap times possible just so the driver would shut up sooner. The character was straight up offensive. Not because it was making fun of Americans, that we can handle, but because it was just boring, annoying TV.

If you don’t know what we’re talking about. Try to get through this video:

Sorry about that. Good news though: you never have to listen to that nonsense again.

Skinner himself confirmed that “The American” will not be returning to season two of the show.

FYI I won't be joining the guys on @thegrandtour 2nd season – I wish them all the luck. My character wasn't developed as I was told.

“My character wasn’t developed as I was told,” is an understatement, Mike! He almost sounds as frustrated as we are that the producers did nothing but feed him the same lines every show about how Britain sucks and cars can only have eight cylinders.

Hopefully they find an interesting way to do the segment, or else we will all know exactly which few minutes to fast forward through again this season.

Related: One of the best car shows on TV is struggling for a reason NASCAR fans know all too well