A Grand Tour presenter was airlifted after a frightening crash 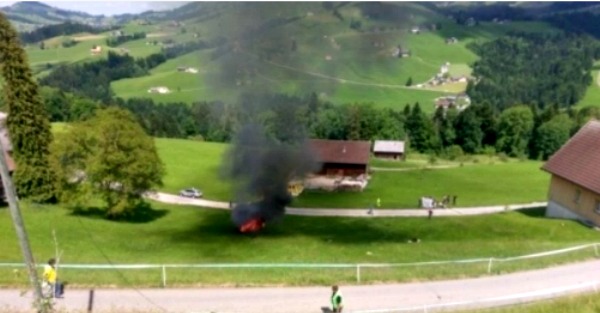 Richard Hammond, the 47-year-old host of The Grand Tour, was airlifted to a hospital in Switzerland after being involved in a very series car crash, according to information provided by The Grand Tour.

Hammond was “completing the Hemburg Hill Climb in Switzerland in a Rimac Concept One, an electric super car built in Croatia, during filming for the Grand Tour Season 2 on Amazon Prime,” the Tour said on its Facebook page. Hammond was conscious following the wreck and talking, the Facebook post said, and was able to get out of the car before it burst into flames.

One report indicated Hammond may have suffered a fracture knee in the wreck of the $2.23 million sports car, which can reach speeds of 200 miles per hour.

This is what his car looked like following the wreck.

JUST IN: Richard Hammond airlifted to hospital after fiery crash while filming "The Grand Tour" for Amazon https://t.co/4s24DAO4Zt pic.twitter.com/GsYoPU4Qnu

This isn’t Hammond’s first serious crash. He nearly died in 2006 after he crashed a jet propelled car. The crash was so bad, he was in a coma for two weeks and said he suffered long-lasting effects, including depression. He was knocked unconscious after falling off a motorbike while in Mozambique earlier this year.

Related: Richard Hammond has checked and he is not dead