These features prove that the Tesla Model X has it all 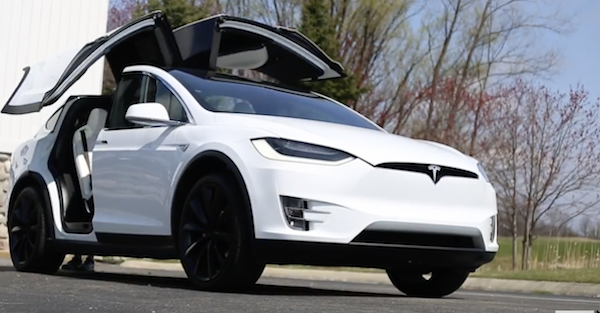 The Tesla Model X is one of the most talked about SUV’s on the market today and for very good reason.  It’s quicker to 60 mph than some of the world’s most renowned super cars, gets over 300 miles to a charge, seats 7 and has fancy Gull-wing doors… Oh sorry, I meant to say Falcon doors, of course.

In this video, Parker Nirenstein shows us five of his favorite features that the six figure Model X has to offer.

He starts with the front doors showing us that you simply tap the chrome strip on the outside where a traditional handle would be and it opens for you.  Once in the car you step on the brake pedal and the door closes. Ok, nice way to start off.

Ironically, during his attempt to show us how the Falkon doors are not supposed to hit anything as they open, he himself is struck by the door, albeit lightly.  I have a feeling if this was a solid object sitting totally still this wouldn’t have happened, but entertaining nonetheless.

Next up was the test drive.  He immediately shows us what I think is the coolest part of the Model X and it’s sibling Model S. The advanced autopilot. At the moment, a simple software update is holding the car back from being fully autonomous. The tech is already installed in some cars but regulatory approval and validation is needed before all of the capabilities will be turned on.

Although some autopilot features like automatic lane changing, automatic braking, auto steer, auto parking and smart summon are available now, let me give you a picture of what this all means once autopilot is fully rolled out.

You park your Tesla in a tight spot in the garage. Standing outside of the car, you are able to press a button on the fob and the car will come to you.  After getting in, you tell the Tesla where to go. Without touching anything, the car not only drives you to your destination, but will park itself while you go on with your day. If you forget the address it’s not a problem. The Tesla will just look at your calendar for appointments in advance and take you there.  Naturally, when you’re ready to go home, you need not walk to retrieve your car, I mean who does that?  No, the Model X can be summoned back to you.
Parker then moves on to the first all glass panoramic windshield. This stretches further back than we’ve ever seen, giving you not only great overall visibility but a wonderful view of the sky and stars. One thing he points out is how expensive this massive piece of glass would be to replace. No worry there Parker, I called Tesla to find out. To my surprise parts and labor at Tesla is only about $1200. I’ve had normal size Mercedes windshields cost more than that.
Parker ends with the previously mentioned summon feature. He stands outside of the car and it drives itself to him. Parker seemed a little freaked out, as most would, with a car driving with no one inside.
Seeing as Telsa gives us a cool new feature about every month, how long until auto ludicrous mode can be activated while sitting in the back seat? Asking for a friend.
Related: Tesla beware, Lucid Air prototype’s 217 mph limiter will soon come off
Advertisement