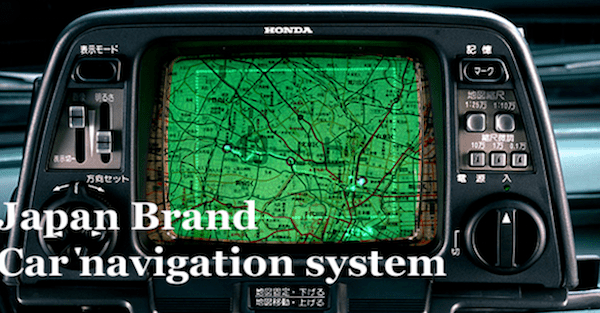 Buying a car with GPS based navigation nowadays is about as impressive as saying you have standard power windows and door locks.  Everyone has it even if it isn’t integrated into the car. Our smart phones do it better anyway.

I remember what I thought was the early days. The first generation Mercedes ML had a tiny aftermarket looking thing that seemed like it was screwed in the dash using hardware from Home Depot.  Its was laughable even then. Before that Oldsmobile had something similar called “Guidestar.”

Although those were the beginnings of GPS navigation, Honda had begun putting an end to family feuds on when the wrong turn was made way back in 1981. Called the Electro Gyrocator and offered in the Honda Accord and Acura Vigor, the inertia based system cost about $7000 in today’s money.  That was about one quarter the cost of the car.

Not having GPS available just yet, the Gyrocator used a gyro and a sensor on the transmission to calculate distance traveled, speed, position and if you made a turn.  The gyro worked by surrounding two wires in helium gas. When a turn was made the helium would move away from one wire causing a temperature difference that was translated by the computer as movement. Traveling straight would register as the same temperature.

Considering the technology at the time, it was impossible for the system to store large maps internally.  Instead, you were given many transparent maps in a binder and a marker.  Yes exactly like what your teacher used in the overhead projector.  You began your route by marking your starting point on the transparent map.  Insert into the Gyrocator and off you go. If you drove until the end of that map you would have to stop, switch it out with the next map and again mark your starting point.

No turn by turn, no live traffic, no British lady talking to you. Just a small flashing dot moving along the map leaving you a little trail on the screen to remind you where you’ve gone.

The many patents and early research that were done for the Gyrocator no doubt made today’s tech possible.  Just a few years ago, a researcher for Honda, Tsuneo Takahashi, was honored with the IEEE medal for environmental and safety technologies for the development of navigation in automobiles.

Thanks Mr Takahashi, we’d be lost without you.