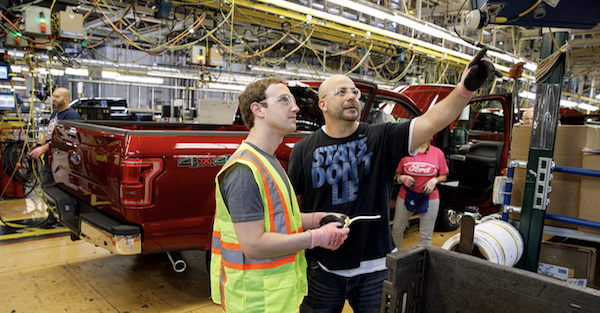 Mark Zuckerberg/Facebook
If you’ve ever started a large successful internet-based company that’s worth almost a half trillion dollars, you know that after a while you can start to feel disconnected from the outside world.  At least that was the case for multi-bazillionaire Mark Zuckerberg of Facebook.
Every year, the 32 years old entrepreneur challenges himself with something new and outside of his normal everyday routine.  Some of his personal challenges in the past have consisted of running 365 miles, learning Mandarin, reading more books, and building a freaking AI robot butler named Jarvis.
This year, he will be embarking on a more down to earth, grass roots type of challenge as he plans on visiting every state in the US calling it the “Year of travel challenge. Mark stated on Facebook:

” After a tumultuous last year, my hope for this challenge is to get out and talk to more people about how they’re living, working and thinking about the future.”

This week, Mark visited Michigan for the first time and did what many do their first time in Michigan, visit an auto manufacturing plant.  Specifically, he stopped by the Ford Rogue plant in Dearborn.
Along with talking to employees on how they are using technology to better their jobs and lives, Mark decided to get his hands dirty and build some F-150’s. And by build, he, ?played a very small part in assembling some new Ford F-150s on the line by adding antennas, cleats and drilling screws.?  He even signed the inspection sticker on one F150.  Wait, so how much more does the Zuckerberg option cost and does it come with a huge thumbs up decal on the hood?
Related: Here?s why a Ford F-150 Raptor is worth  $65,000