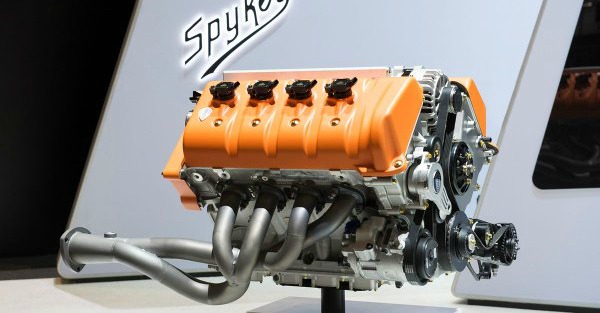 Koenigsegg is no stranger to innovation in engine building. They are already known for camless engine designs, single speed transmissions in 200+ mph cars and manufacturing some of the most powerful cars on earth.

When you are used to making engines with twin turbos producing north of 1200 horsepower, suddenly an NA 600 horse v-8 doesn’t seem so special. And it is exactly that experience that has Christian von Koenigsegg supremely confident in his latest creation. Speaking with Road and Track about the engine he is producing for the Spyker Preliator Coupe Koenigsegg said,

“…of course [our] engines are bulletproof with 1360 horsepower, our customers don’t kill engines, so that engine will last for I don’t know?200 years or something.”

200 years is quite the bold claim. But considering the relative simplicity of the current build, maybe he is onto something. Using the same processes and parts from their cutting edge engines, this V8 is producing only a fraction of the power that the block and internals are designed for. Usually a 600 HP car is wringing out every last ounce of power available but this one is practically laid back compared to its higher performance cousins.

I guess the days of a 600 HP daily driver are here.