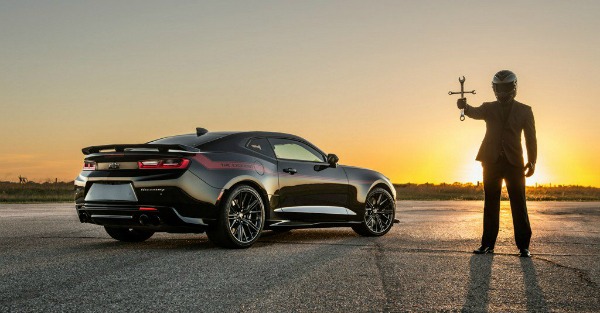 A demon is being released to the public at the New York auto show this month. No, it won?t be in the form of a 12-year-old girl in serious need of an exorcism by two brave priests.

This Demon wears a Dodge nameplate and is the latest iteration of the hot Challenger lineup. Teaser videos have been all the craze leading up to its reveal and we know the Demon is going to be one mean little devil.

The Demon will be equipped with many industry firsts including the first factory trans brake, AC refrigeration used to cool the intake charge, factory drag radials and the ability to utilize race gas. Without even knowing its horsepower numbers, this is enough for most to throw in the towel and accept defeat from evil lurking below.

But not everyone is scared of demons. Answering the call is none other than Texas?s Hennessey Performance. Their Exorcist Camaro ZL1 starts off as a factory 6th Generation Camaro ZL1. Performance numbers are dramatically improved with a reported sprint to 60 mph in less than three seconds and sub 10 second quarter mile times.  This is all made possible via more traditional modifications. Those would include a larger more efficient supercharger, ported factory cylinder heads, custom camshaft, headers, high flow air induction system and, of course, a tweaked tune from HPE. These modifications bump its power to a staggering 1,000 hp and 996 lb-ft of torque at 14 psi of boost.

Cleansing the world of evil isn?t cheap, and there won?t be many of you out there to do it. Only 100 units will be produced each year and the cost of the base package alone is $55,000. That?s right, there are options.

If you plan on letting the Exorcist shift gears for you, an additional $9,950 will be needed to upgrade the 10-speed auto transmission. Kudos to the six-speed manual for being able to handle the additional power.

A cool $8,950 gets you a drag pack that provides a stronger driveshaft, 20 inch wheels wrapped in 315/30 Nitto drag radials and a tool kit with a jack.

If taking turns is your thing you can go with the $6,995 road race pack that gives you Michelin Pilot Sport Cup 2 tires mounted on light weight 20 inch wheels.

I honestly don?t see any Exorcist buyers not opting to add at least one option. I mean, once you add the $65,000 or so price tag of the ca, you are well into six figures. What?s a few grand more?

To top off a killer combo, Hennessey will back this beast up with a two-year 24,000 mile warranty. We are living in good times indeed.

Godspeed Exorcist Camaro buyers, we all need you.