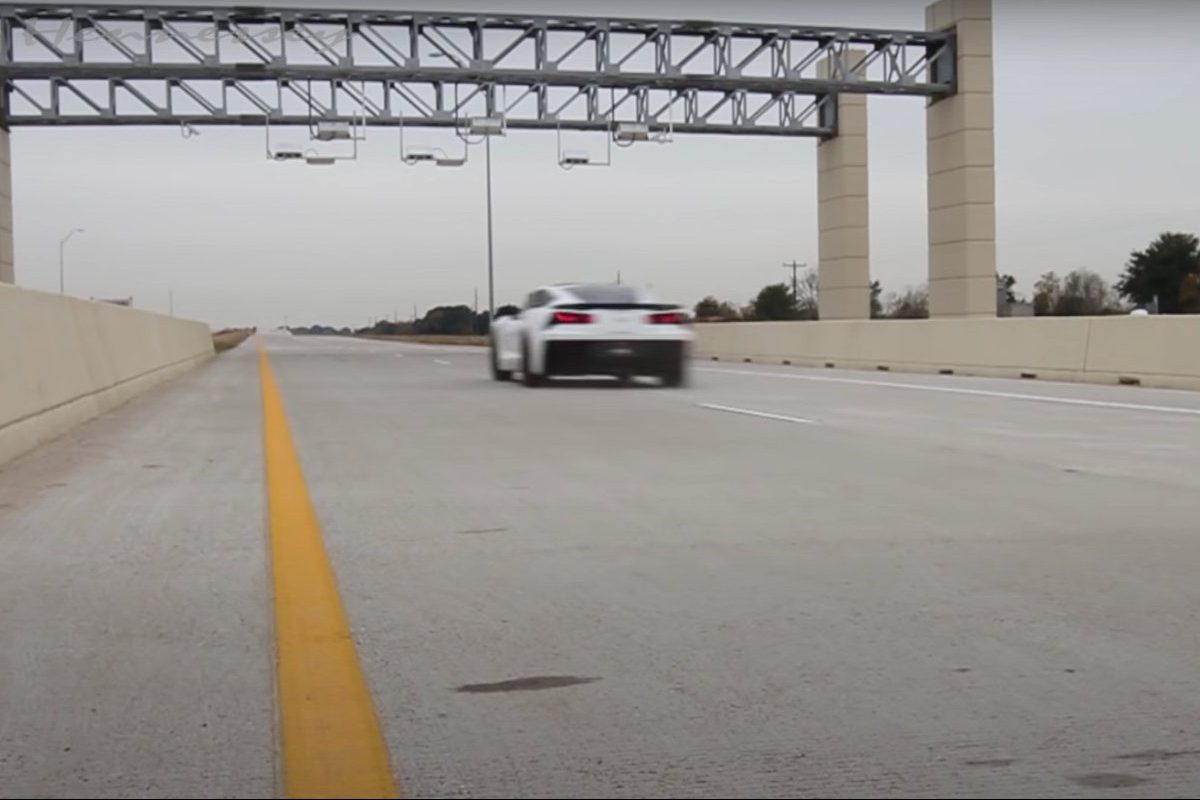 Surely, you’ve heard of Hennessey Performance, and if you haven’t, you’ve been missing out on some seriously high-horsepower packages for a wide variety of vehicles. Back in 2013, the Texas-based company took the brand-new Chevrolet Corvette Stingray, modified it, and managed to create the first Chevy C7 Corvette capable of 200 MPH. It’s kind of mind-blowing to think about how fast they adapted to the new -eneration Corvette. I mean, the car started production in September 2013, and the performance shop gave it supercar comparable speeds and shot this video by December 2013.

John Hennessey, who owns Hennessey Performance, has been known to completely transform the way a car performs. He surely proved to everyone what he was capable of on this day. The video takes place on a Texas toll road, and the original goal was to test the EZ tag toll system with a high speed pass through. The road was shut down, of course, and the driver — John Hennessey himself — took advantage of the opportunity. Fitted with their HPE600 package and a bit of nitrous, it took off at full speed down the Houston Grand Parkway. Take a look at the madness!

That was just absolute insanity, as Hennessey’s Supercharged ‘Vette C7 captured a top speed of 200.6 MPH. It looked like even the helicopter had a tough time keeping up with it. You see that button that John’s holding with his left hand? That’s the nitrous, and he’s got that button held throughout the entire fifth gear. You can hear the car find the extra power, and it handled it like an absolute champ. But, would you believe me if I told you the Corvette in this video is actually fitted with least powerful package that Hennessey offer?

Let’s take a deeper look at what packages are offered from Hennessey Performance. No matter if you have a Stingray, Grand Sport, Z06, or the C7 ZR1, they’ve got you covered on any of the models. Here, we’re going to be looking at just the packages offered on the Stingray and Grand Sport.

This is the the lowest horsepower package out of the bunch, but still ramps up the power to just over 600 HP! It’s compatible with both the Chevy automatic transmission as well as the manual. It includes a high-flow supercharger system, a high-flow intercooler system, and Hennessey’s HPE engine management calibration tuning. Of course, you’ll get your Hennessey badges and floor mats around the car, as well as a serial-numbered dash and engine plaques. The best part about this package is that it comes with a 3 year/36,000 mile limited warranty. It’s a good feeling to have a performance car covered in the case something goes wrong.

Things get a little more interesting with this package, putting the C7 Corvette stingray at 750 HP. It still provides the high-flow supercharger, but includes a lot more goodies than the 600 package. It’s fitted with stainless steel long-tube headers and high-flow catalytic converters. They’ll also throw in CNC ported cylinder heads, lightweight intake valves, and heavy-duty dual valve springs. The fun doesn’t stop, though, because this package includes a hydraulic roller camshaft, hydraulic lifters, and heavy duty pushrods. It’s road-tested and dyno-tuned by the shop, and they’re guaranteed to have that coupe running perfect for you. Surprisingly, you can also get a 3-year warranty for this package, as well. Can’t complain about that!

Finally, we’ll move on to the top-of-the-line Stingray package offered by Hennessey. If you haven’t noticed the pattern yet, this package will boost power up 1000 HP! Not only do you get the complete supercharger and intercooler systems, but you’ll also get a 416 CID stroker motor with a four inch stroker crankshaft, custom aluminum pistons, forged steel wrist pins, and billet H-beam connecting rods. It comes with a full exhaust, and you still get the HPE camshaft and heads that were included in the 750 package. If you opt for this package, you better know how to tame this beast or it could get ugly really quick. With a 0-60 time of just 2.5 seconds and a top speed of over 220 MPH, this car does not mess around. If you’re thinking to yourself, “there’s no way you can get a warranty on that,” you’re wrong. Although it’s not a 3-year, you’re still covered with a 1-year/12,000 mile limited warranty.

If you’re looking to really spice up your ride, you should check out what Hennessey Performance can do for you. You don’t need to own a Corvette. They have tons of different makes and models that they service, and there are multiple packages, so you get the exact amount of power you’re looking for. When they’re through with it, you’ll have a truly badass race car ready for the road or track!