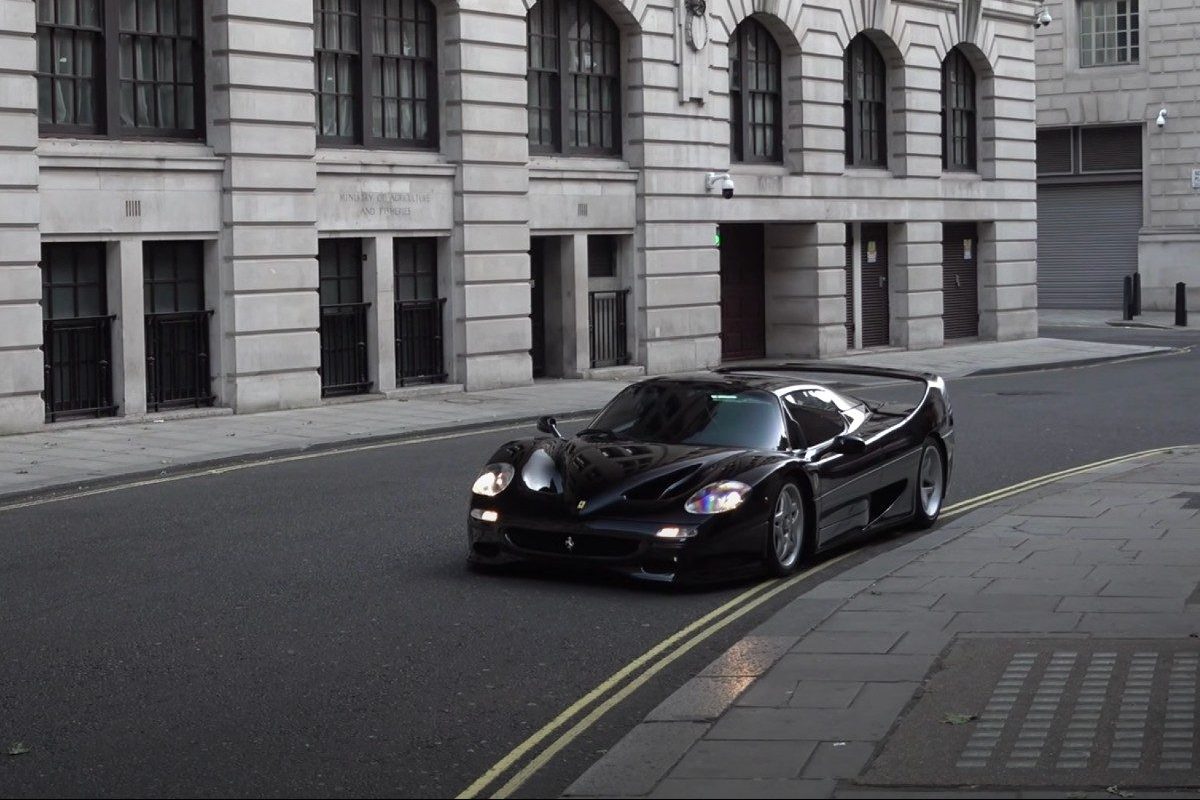 Here’s something you won’t see very often: A beautiful black Ferrari F50 supercar roaming the streets of London. If you’ve ever looked into these cars, you’d notice that most of them come in red. Not this one, though. It’s rare to have an F50 in black straight from factory, since only four cars were finished in this color. It’s not only the color that makes it so sought-after, but this Ferrari is also decked out with a straight pipe exhaust to give it an extremely unique exhaust note.

Enzo Ferrari would have been proud to see this guy sporting his car around the streets. That’s what this car was made for, as it’s essentially the road car version of a Formula One race car. That’s got to be one hell of a driving experience!

Just look at the way the camera man followed the Ferrari driver around the city. That’s when you know you’ve got a car that will make people’s jaws drop. Check out the video for yourself!

The aerodynamic bodywork and styling of the Ferrari F50 is absolutely timeless. Italy always comes out with some of the best supercars, and this one is no exception. Designed by Lorenzo Ramaciotti and Pietro Camardella at Pininfarina and assembled in Maranello, Italy, the F50 was made to celebrate Ferrari’s 50th anniversary. The car’s design is an evolution of the 1989 Ferrari Mythos concept car. The goal behind the F50 was to create a street-legal version of the Italian automaker’s F1 car. This car is also essentially the brother to the Ferrari F40 sports car. It drew inspiration from the 1995 Formula 1 Challenger, however, the engine in the F50 was designed to work better on the road with traffic.

The F50 GT includes a fixed hardtop, a large rear wing and front spoiler, speedline racing wheels with racing slick tires, and a large rear diffuser. Unfortunately, Ferrari canceled the F50 GT once purpose-built race cars like the Porsche 911 GT1 began joining the competition. This was also due to lack of funding.

Unlike the F40 that sported the twin-turbo V8, the 6-speed manual F50 is fitted with a rear mid-engine naturally aspirated DOHC 4.7L V12 engine. It has a cast iron block and a carbon fiber reinforced intake manifold. This high-revving engine produces over 500 HP and has a redline at 8,500 RPM. Pair that with a straight pipe exhaust system, and you’re left with an absolutely beautiful noise.

The carbon-fiber chassis has a honeycomb structure core and includes a central carbon fiber tub, light-alloy suspension, and engine-gearbox mounting points on the chassis. Both the front and rear suspension consist of rose-jointed unequal length wishbones, push rods, coil springs, and Bilstein gas-pressurized monotube dampers. Front suspension is even offered with electronic adjustability. It has a curb weight of 2,700 pounds and a wheelbase of 101.6 inches.

Top speed of this awesome ride is officially marked at 194 MPH, however, some claim that it could hit 202 MPH. It consumes quite a noticeable amount of fuel, but it’s a good thing it’s got a 28-gallon fuel tank to keep you going. Anyone looking for a test driver for one of these? If so, I volunteer as tribute. Getting behind the wheel of one of these should be a bucket list item for just about any car enthusiast.