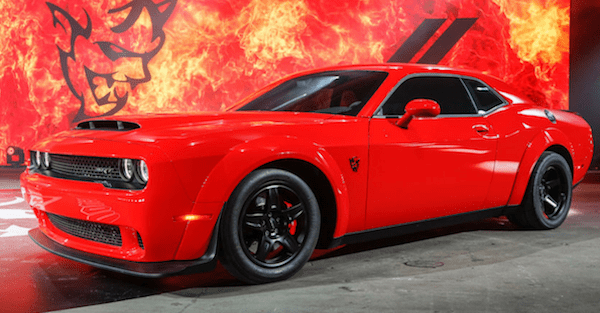 The car company that just released a 9 second quarter mile animal called the Demon has just applied for a patent on the name “Angel.” One of the purest, most holy names we have could be covered in road grime on the back of a Fiat Chyrsler product one day and no one is really sure what to think of it.

It was reported by Fiat Chrysler Authority that on July 17th Fiat Chrysler Automobiles (FCA) applied to register the name for use on a passenger automobile. This doesn’t necessarily mean they will come out with a car named Angel as some auto makers do this so a competitor isn’t able to release a rival car with a clever name, but with Dodge you never know.

If we just go by what Dodge has been coming out with lately, the Angel could be another crazy muscle car that’s even faster than the Demon. Or maybe it is a car that is more focused on handling as an Angel can fly around ever so gracefully. On the other end of the spectrum, it could be an all electric eco car meant to appeal the the green crowd. It would be sort of an apology for coming out with cars and trucks that get around 10 mpg on a good day.

In the end, no one knows what they will do with this name plate but let’s just hope an Angel is looking over all of us and we get something else ridiculously fast to rival the Demon.

Related: Dealers have found a workaround to jack up the price of Dodge Demons