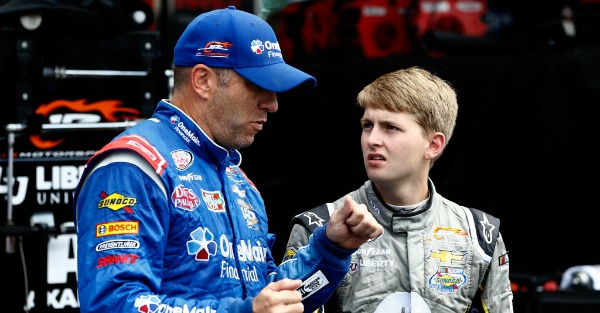 Jeff Zelevansky / Stringer
during practice for the NASCAR XFINITY Series Zippo 200 at The Glen at Watkins Glen International on August 4, 2017 in Watkins Glen, New York.

Being discovered is the turning point in a NASCAR driver’s young career. Unless they grew up in a famous racing family, like the Earnhardts or Andrettis, racers need a lot more than racing talent to break into the racing world. Most drivers come up through the ranks of dirt track racing, waiting to either impress the right guy, or outright beat them.

Not everyone follows the traditional path, however. Particularly true with the new generation, video games and simulators can play a pivotal role in a prospective driver’s life. Such is the case with newly promoted William Byron.

You never know where a racer can get his start. Check out this YouTube comment from an @iRacing event I hosted 6 years ago. 🏁@WilliamByron pic.twitter.com/3SkN5chG0k

Landon Cassill shared a screenshot showing a young Byron, only 13 years old at that point, commenting on a Youtube video of an event Cassill hosted on the popular simulator iRacing.

According to NBCSports, Byron didn’t remember leaving the comment but took a moment to reflect on the unusual way he got into racing.

?That?s pretty cool to kind of see how far it?s come and see the support there,? Byron said. ?I think I was asking how to go faster, so that?s usually what we ask about as race car drivers. It?s really neat. iRacing was the platform for me that I was able to start racing in and understand the cars and understand all the driving aspects. I think it?s kind of crazy that everything started on a video game, but I think it?s something that I really would promote to young kids coming up is to get involved. If you can?t get in a real race car, to get on iRacing and you can do it and you don?t have to, I guess, have all the contacts and everything to get in a real race car.?

While he didn’t remember that particular comment, Byron does remember running into a few surprising names when putting in digital laps.

“There was one race with Travis Pastrana, that was pretty cool,? Byron said. ?He was racing in the Xfinity Series and he was just trying to actually learn, and I was kind of a fly on the wall and just racing against him and everything. Other than that I just raced against the community on there. You?d be surprised, there?s some really good race car drivers on there. Me and Kyle Larson were racing a few months back, so you never know who you?re going to see on there.?

It is easy to turn your nose up at video games, but it is truly amazing how far the technology has progressed. Drivers have already made it known that they use simulators to get in practice laps in between races and in the offseason and now there is more proof that cutting your teeth in front of a computer screen is a viable start on a path to the highest levels.