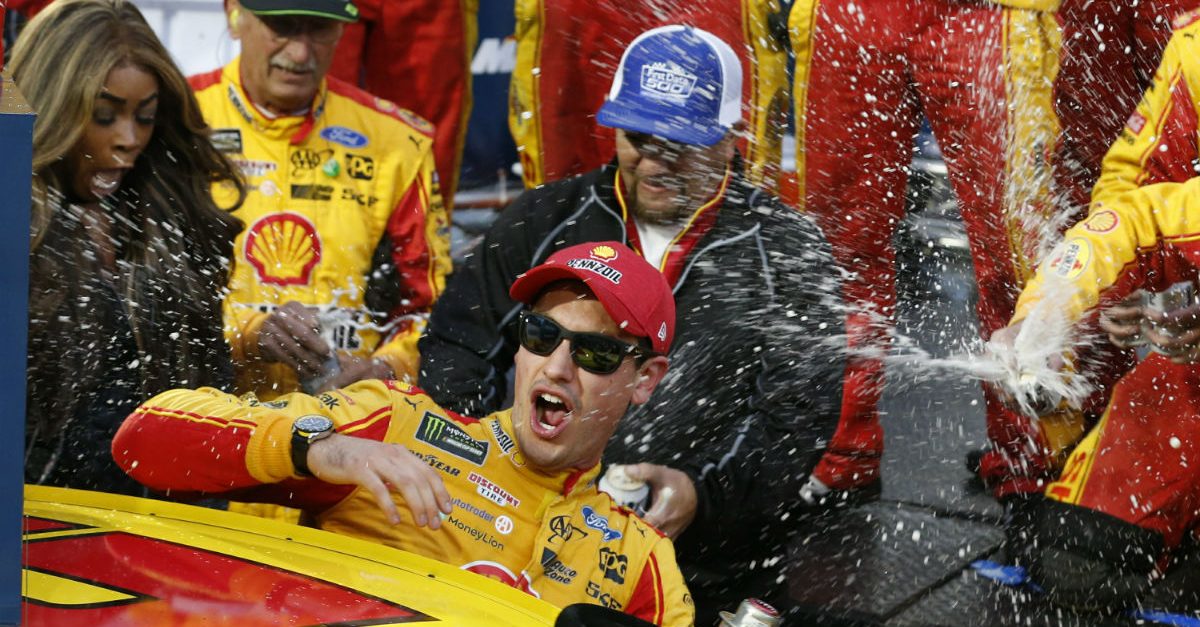 CHARLOTTE, N.C. (AP) — Take a deep breath and rewatch “Days of Thunder” a couple hundred times to put some perspective on Joey Logano’s latest dustup with another driver.

Logano sparked a storm of controversy at Martinsville Speedway when he bumped reigning series champion Martin Truex Jr. out of the lead to claim victory. It wasn’t any old win, either; it qualified Logano for NASCAR’s championship-deciding race at the end of the season.

At this stage of the season, a victory is the golden ticket to Homestead-Miami Speedway’s winner-take-all finale. It is really that simple. There are eight drivers vying for four spots — and one was dangling in front of Truex and Logano on Sunday.

First things first: Logano maybe wasn’t expected to make the final four, not this season. His only other win was at Talladega Superspeedway and Team Penske has been overshadowed on the track by Ford partner Stewart-Haas Racing. The regular season was so dominated by Truex, Kyle Busch and Kevin Harvick it has just been assumed the so-called “Big 3” would gobble up three of the four championship berths.

Read More: Celebrate 28 Years of ‘Days of Thunder’ with These Classic Clips

So for Logano to make it to the finale, he needed to be perfect for three races or in position to win one.

There he was at Martinsville, out front for a race-high 309 of the 500 laps, raced extraordinarily hard in the final stretch because Penske teammate Brad Keselowski was glued to his bumper. He had a door-to-door battle going with Truex for much of the final 10 laps. The racing was clean and Truex was an on-track gentleman, a sportsman worthy to be called champion, in taking the lead from Logano.

But Logano had to have that win. It was his best and perhaps only chance to qualify for the finale, and that chance came on the final lap.

He pulled a bump-and-run and figured he’d let the chips fall as they may.

The move worked and Logano punched his ticket to Miami. An infuriated Truex must try again this weekend to return to the finale.

The bump was a throwback move to when drivers used their race cars as muscle, and they created racing that captivated its audience. It was the jaw-dropping, white-knuckled bumping and banging that made “Days of Thunder” a pop culture sensation and created an unrealistic expectation of NASCAR racing.

We are going to Homestead to race for a Championship!!!! 🏁 #TeamJL

But it’s quintessential NASCAR, not all that different from what Logano did to Matt Kenseth to win a playoff race at Kansas three years ago.

In this latest instance, Logano knocked Truex out of the way, slipped past him and straightened out his wiggling car enough to cross the finish line in first. Truex’s car went sideways and Denny Hamlin stole second place from him.

The consequences were immediate. Logano was booed, Truex joined the jeering from pit road and the crew chiefs exchanged angry words.

Truex vowed to prevent Logano from stealing his crown: “He may have won the battle, but he ain’t winning the damn war.”

Logano car owner Roger Penske wasn’t pleased to learn Truex called the bump-and-run a “cheap shot” and he was unusually feisty in his rebuttal.

“He’s a racer and should know better than to say that,” Penske said. “That’s as clean a shot as you can have in a race like this. We want to go to Miami. Joey ran a great race. As far as I’m concerned, that’s just a comment that I don’t think we deserve. We’ll race him day after day.”

Everything was on the line for Logano and he’d have been lambasted for not trying something — anything, really — to try to win. The second-guessing if he’d tried nothing would have lasted the entire third round of the playoffs or until he won a race. If Logano wasn’t going to put it all on the line, then what’s the point of even getting into the race car each week?

If more drivers raced the way Logano did on that lap, people might start watching again.