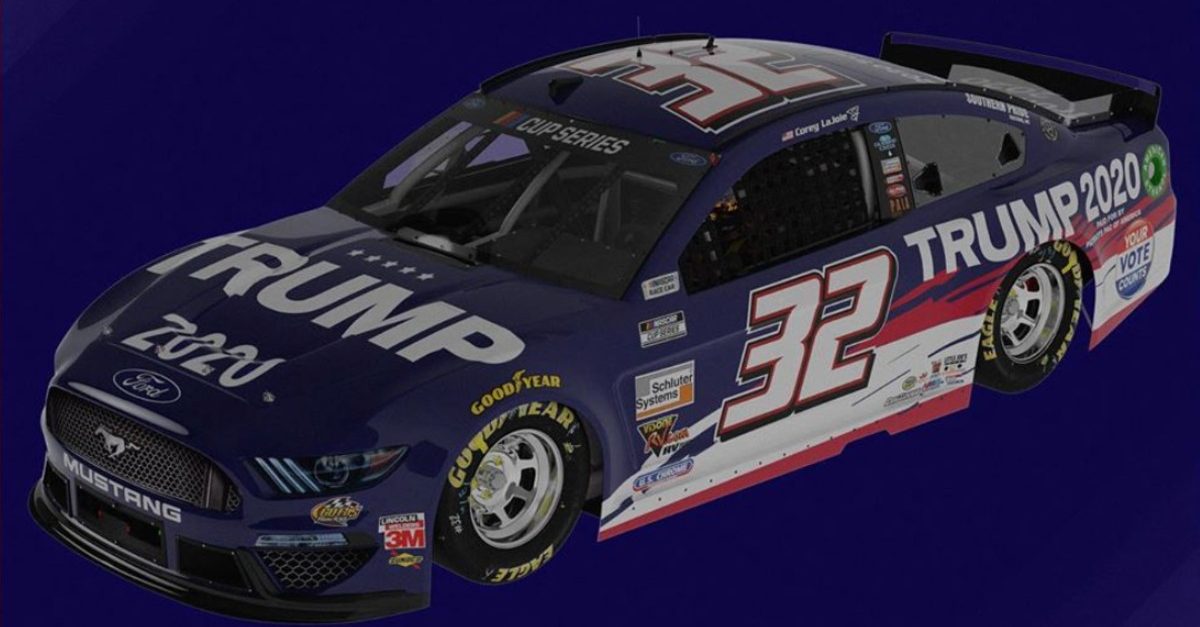 When NASCAR heads to Indianapolis Motor Speedway for the Brickyard 400 this Sunday, NASCAR driver Corey Lajoie will have ?Trump 2020? plastered all over his race car.

?With an estimated 75 million NASCAR fans out there, I was surprised that about 15 million of those fans are not registered voters,? LaJoie said. ?I will give my best effort to get NASCAR fans registered to vote through our team efforts on and off the track. When they see the car, hopefully, it makes them race to the polls in November.?

This red, white and blue No. 32 Ford will debut this weekend @IndianapolisMotorSpeedway for the first event of a nine-race partnership with Patriots of America PAC! ⁣ ⁣ Catch the patriotic scheme in the #Brickyard400 on Sunday at 4 p.m. ET on NBC! 🇺🇸

Read More: Bubba Wallace Net Worth: How NASCAR?s Trailblazer Made His Money

Jeff Whaley, a spokesperson with the Patriots of America PAC, added, ?Our mission is to get voters registered and to the polls in November. We are excited about our sponsorship with Go Fas Racing No. 32 and Corey LaJoie. We feel this partnership is the best way to help us communicate this message to the NASCAR community and encourage all Americans to do their part by heading to the polls,? said Jeff Whaley on behalf of Patriots of America PAC.”

LaJoie, a native of Charlotte, North Carolina, has driven the No. 32 Ford Mustang for Go Fas Racing since the start of the 2019 season. He will be racing in the “Trump 2020” paint scheme for an additional eight NASCAR Cup Series races following the Brickyard 400.

?I am honored to be part of the president?s re-election campaign through the Patriots of America PAC,? said Go Fas Racing team owner Archie St. Hilaire.

?As a Trump 2020 supporter, this team will do everything possible to secure victory on and off the track electing President Donald Trump to a second term. Let us bring this country back and Keep America Great!?