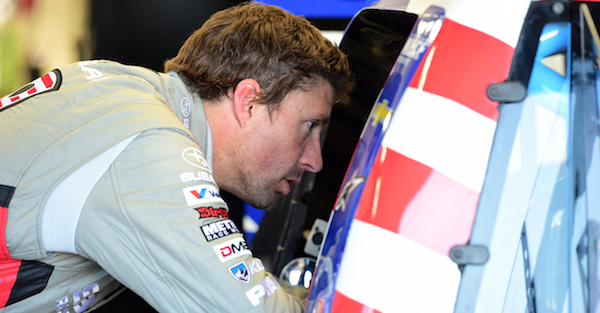 Travis Pastrana is returning to NASCAR this Saturday for the first time in nearly two years.

Pastrana will compete in the Camping World Truck Series race at Las Vegas Motor Speedway. He will drive the No. 45 Chevrolet for Niece Motorsports, and his truck will be sponsored by hot dog restaurant chain Wienerschnitzel.

Here is @TravisPastrana’s new paint scheme for @LVMotorSpeedway which is sponsored by @wienerschnitzel. pic.twitter.com/dVtCgH9k91

Related: Travis Pastrana finds out why you shouldn?t try to show off in a slingshot

He's coming back!!!! Excited to see you @TravisPastrana. https://t.co/q57IlfFNrA

The former X Games star has only raced in two Truck Series races in the past, but he has raced in the Xfinity Series 42 times. He said in a press release that he’s looking forward to the challenge of returning to NASCAR.

“I love NASCAR, and Las Vegas is always a good time, so I?m really looking forward to this weekend,” Pastrana said. “I?ve actually worked with several of the people on this team in the past. It?s a fun group and we have a good rapport. NASCAR is something that challenges me. I?ve done a lot of work over the past couple of years to try and improve my pavement skills. I?m really excited to be able to get behind the wheel again and see what we can do in the Truck Series.”