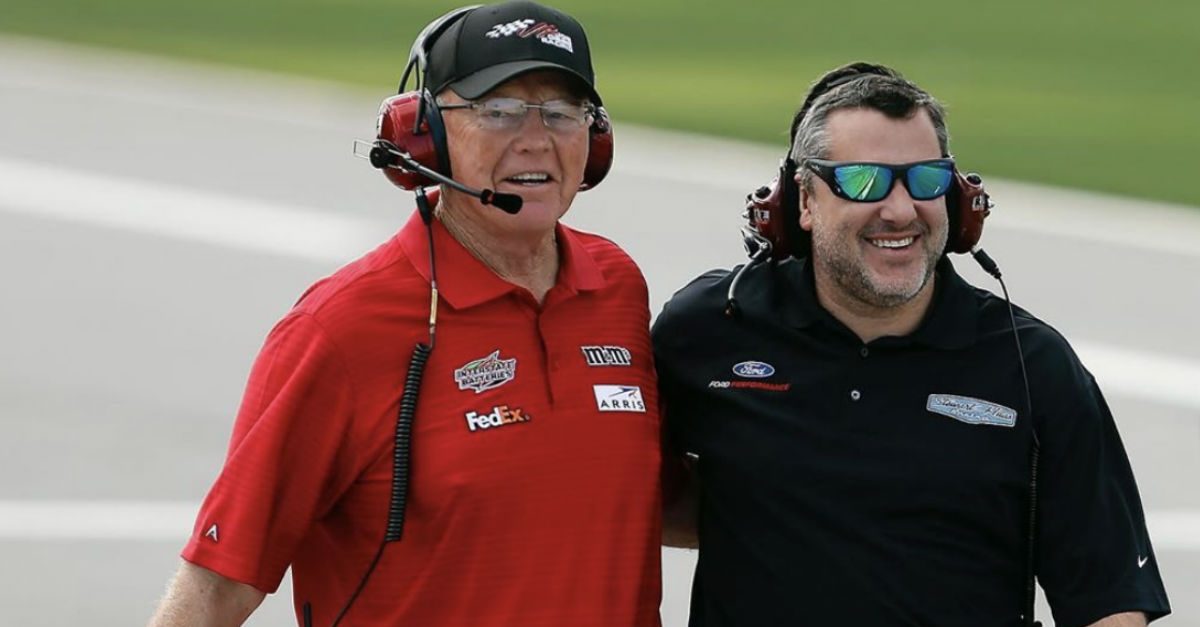 HOMESTEAD, Fla. (AP) — Tony Stewart was convalescing from a nasty wreck, and he was depressed because, as he cracked, “if you live with your mom and stepdad for a month, you’ll be depressed,” when he took a phone call he was sure was a prank.

His buddies had taken turns messing with Stewart, saying they were A.J. Foyt or Mario Andretti, before he finally stopped answering the phone. Mom, though, still picked up. Pam Boas took a late-night call and passed the phone to her son.

It was indeed the real Joe Gibbs on the line, and the NFL coach-turned-NASCAR owner was trying to strike a deal with Stewart to join his race team. They would eventually meet in Indianapolis — a negotiation that somehow included Don Meredith and Stewart’s bluff to run a Top Fuel car — and lay out the details of the contract. Because of some long-distance phone tag, the finishing touches became a bit more complicated.

“I couldn’t find him lots of times,” Gibbs said. “I would call the girlfriend, and she would tell me where he was and everything. So about the third time I called the girlfriend, she goes, ‘That no good, rotten — don’t you ever call this house again.’ I went, well, that was done.”

Those calls in the late 1990s sparked a lifelong connection that has stretched through even more girlfriends for Stewart, NASCAR championships won together, busted TVs, tough love, media dustups, grief, a professional breakup and two more big milestones coming up fast: They will face each other as owners Sunday in the winner-take-all title race, followed by a 2020 induction in the same NASCAR Hall of Fame class.

Heck, Stewart might even spruce up for the occasion. He dressed Friday in a short sleeve, gray button-down shirt emblazoned with logos and a black Ford hat. Gibbs wore a white, button-down shirt and black sports coat, more fitting for a night out at a swanky Miami Beach joint than a stroll through the garage.

In the pits, it’s Coach vs. Smoke.

“To be able to compete against him for a championship is a really cool deal,” Stewart said. “This whole year and everything with the Hall of Fame, all of it is really special to be doing a lot of this with Joe.”

Stewart took many of the lessons learned racing for a decade for Gibbs with him when he left and teamed with Gene Haas to start their eponymous race team in 2009. Stewart won Cup titles for Gibbs in 2002 and 2005; and one as an owner/driver in 2011.

The R-rated Stewart, who is 48, learned how to lead a team from the God-fearing Gibbs, 30 years his senior.

Stewart rarely resembles the notoriously gruff driver known as Smoke, whose prickly mood put everyone on edge. He threw punches, ripped NASCAR and was one of the most feared drivers in the field. He will forever be linked to a 2014 sprint car race in which 20-year-old driver Kevin Ward was killed after being struck by Stewart’s car; Stewart was not charged and he later settled a lawsuit filed by Ward’s parents.

Stewart has mostly stayed in the background as a team owner, though he was caught on tape in July fighting a fan at a sprint car race.

“With time, guys grow up,” said Stewart, who still races sprint cars. “It took me a lot longer. I’m not even sure I’m there yet.”

The blow ups and bad days are dwarfed by the good times and checkered flags Stewart has enjoyed at JGR.

Even the arguments seem lighthearted these days: When Gibbs said he never penalized a driver for any reason, it started a back-and-forth that had both in fits of laughter.

Gibbs: “I used to try and get to the hauler as fast as I could if he had a bad night because he was going to tear up the inside of the hauler.”

Stewart: “I feel like I got pretty good odds out of it because I think I broke five TVs before he finally said if you break another one, this one is coming out of your paycheck.”

Looking forward to getting behind the wheel of this hot rod on Sunday. Leading the field to green for the #FordEcoboost400 at @HomesteadMiami. 😎 pic.twitter.com/DGMpDHPOHV

Stewart earned Gibbs plenty of prize money through the years. The fiery Indiana native was one of the most proficient drivers in racing, winning in every kind of series, from sprint cars to a dominant stretch in NASCAR where he reeled off at least one win in 15 straight seasons. Harvick won a title for SHR in 2014 and was the lone standout for the team this season. Aric Almirola and Clint Bowyer qualified for the playoffs but were never legitimate contenders.

“Tony definitely has his strengths, especially when it comes to the sponsorship side of things,” Harvick said. “He’s very good at courting people, keeping people, when you need him to re-up or resign their contract.”

Stewart indeed spent part of championship week firming up his 2020 Cup lineup, dumping Daniel Suarez and promoting Cole Custer from the Xfinity Series. The four-car lineup will have a different look for the fourth straight season, and SHR is still trying to hit on championship season consistency.

“Our goal is to be in the scenario Joe’s in and have multiple cars in,” Stewart said.

It’s one more way Stewart wants success like Gibbs. He hopes to answer the call again.

Read More: A Look at the 4 Drivers Racing for the NASCAR Truck Series Championship