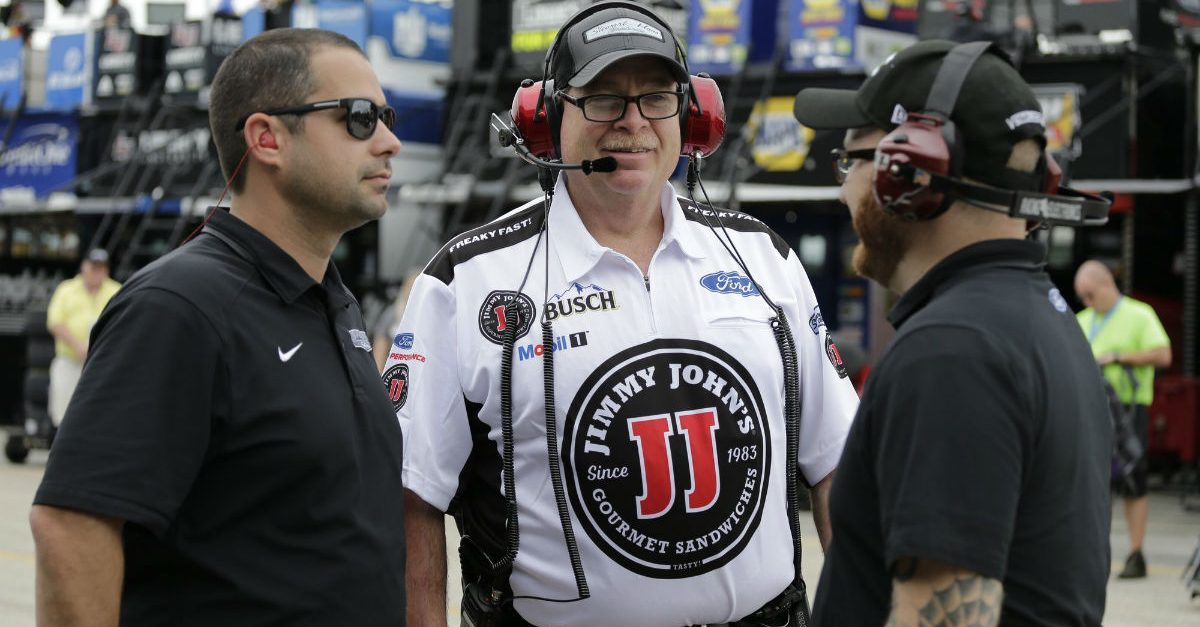 HOMESTEAD, Fla. (AP) — Tony Gibson was driving home from Stewart-Haas Racing’s shop this summer when he lost feeling in his hands and feet.

He had to pull over. He had no other choice. He ended up in the emergency room for overnight observation, where doctors found a blood clot in his vertebral artery.

He was hospitalized more than a week and seemed to be making progress when he suffered a mini-stroke in his optical nerve system. He lost 85 percent of the hearing in his left ear and most of the functions in his left eye.

“It was quite a deal,” Gibson said.

It’s been quite a recovery, too. Gibson has come so far that he will play a pivotal role in the season finale at Homestead-Miami Speedway on Sunday.

The 54-year-old Gibson is filling in for suspended crew chief Rodney Childers on Kevin Harvick’s No. 4 Ford. Gibson will be atop the pit box and making key decisions for Harvick’s championship run.

"All you haters, I see you."@KevinHarvick isn't out to make friends. He's out to win his second @NASCAR Cup Series championship Sunday on NBC. #4TheCup pic.twitter.com/qkhHizKq3Q

“My biggest fear is just making the wrong call or doing the wrong thing,” Gibson said. “I want those guys to be proud of me.”

Gibson made the perfect call at Phoenix last week, opting for two tires on the final pit stop that helped Harvick finish fifth and earn the fourth and final playoff spot. Gibson joked during the race that he hadn’t brought enough medication to get through the tense final laps.

He packed extra for Homestead. He’s even missing a neurologist appointment Friday to be with the team.

“I’m managing it,” he said. “It’s just part of life and things. I was very lucky, and I don’t take that for granted. There’s a lot of people out there that are way worse than me, so it’s just something that I’ll overcome and I’ll get used to it and go on.”

I will be honest, that is the most nervous I have ever been on top of the pit box in my entire career. It wasn’t pretty but everyone on the #4 team stayed calm and got the job done today. On to @HomesteadMiami to fight for the Championship! Note- I’m way to old for this👴🏻#retired

In the meantime, he has a championship to chase.

Harvick is considered one of the two favorites at Homestead. He’s tied for the series lead with eight victories, but two of those came in illegal cars. His Las Vegas victory from earlier this year was disqualified as was his win at Texas two weeks ago. That penalty cost Harvick an automatic berth in the championship race and forced him to have to outperform several others at Phoenix.

Childers and car chief Robert Smith were suspended for the final two races.

Fortunately for Harvick, Gibson was available — and healthy enough — to fill in.

“When you take two of the key people off, you always wonder whether it’s a quarterback or a running back or a wide receiver,” Gibson said. “Can the others step up and do a good job? I think that’s where Rodney and this company at Stewart-Haas has done a good job. We have a lot of depth here at this company.”

Gibson won the 2017 Daytona 500 with Kurt Busch and was a part of championship-winning teams featuring Jeff Gordon (1998, 2001) and the late Alan Kulwicki (1992). So he’s well-equipped to deal with the pressure and distractions that often come in a one-race championship.

“The biggest thing that Tony brings is just a ton of experience,” Harvick said. “Obviously a familiar face to the NASCAR officials, and he’s been with Stewart-Haas for a long time and worked with all those guys and worked with everybody in the shop.”

Read More: Tony Stewart Net Worth: Here’s How the NASCAR Legend Made His Money