This pit crew member made NASCAR history at Dover 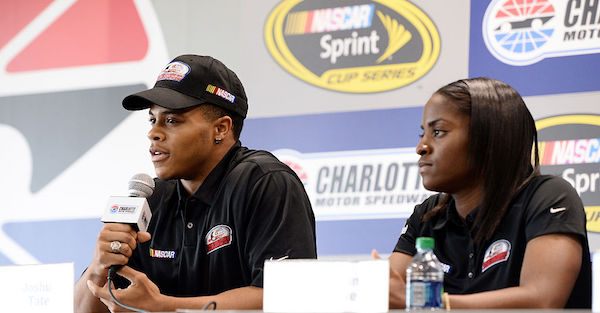 Daniels became the first African-American woman to pit a vehicle in a NASCAR race on Friday evening during a NASCAR Camping World Truck Series race. Daniels changed tires for Cody Ware, who finished 18th in the race.

Related: This driver will become only the fourth African-American NASCAR driver since 1961

Earlier in the year, Daniels also became the first African-American woman to go over the wall in an Automobile Racing Club of America (ARCA) race.

Daniels, 23, said she received plenty of stares during her two days in Dover.

“I was like, wow, people really aren’t used to seeing a woman of my color in the sport!” Daniels told ESPN. “The stares came from fans and crew members. I saw people breaking their necks to turn around and look at me after I passed by. I got even more stares when I actually had on my firesuit.

“I had to glue up [put lug nuts on] my tires before the Xfinity race. People were sitting there looking at me. I looked up at this lady who was watching me, and she gave me a thumbs-up.”

She was only supposed to change tires for Harmon in the Xfinity Series, but she went a day early and found a job changing tires for Ware.

The next step for Daniels is working in the pit crew in the Monster Energy NASCAR Cup Series. After making her debut in Dover, it’s just a matter of time before she advances even further.