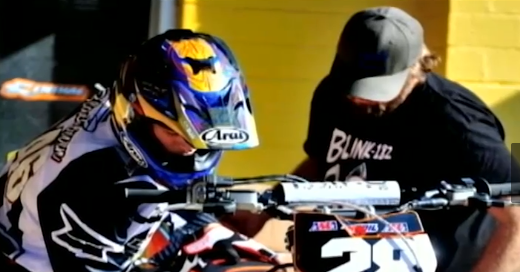 This is nothing short of terrible.

The father of Chance Blackburn, a first-year professional Motocross rider, was killed after police say he was purposely run over in an Oklahoma City parking lot after watching his son on TV.

The account of what happened comes from KXLY television, based on information from police.

Rob Blackburn went to a bar to watch his son race. When he was done, he left the bar and saw what he thought was a drunk driver hit another vehicle. He tried to stop the driver from leaving, but police told the television station that driver ran over Blackburn and knocked him down. The driver, according to police, then ran over Blackburn twice more. He died from his injuries.

“He could walk into any room and everyone just loved him. I mean, he was the nicest, most genuine person,” Chance Blackburn said.

Chance Blackburn said the bartender and his dad hit it off because they were both fans of the races.

“The guy that was serving him that night and watching Supercross with him, because that bartender was a fan of Supercross, he messaged me on Facebook, he reached out this morning, and said your dad was very proud of you and your sister and talking about it,” Chance Blackburn said.