A father gets into a nasty wreck while street racing, and his little girl is paying the steepest price 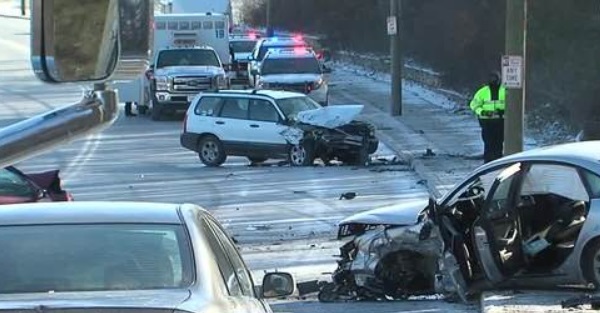 A four-year old child suffered life threatening injuries as the passenger in a car accident when police say her father’s vehicle crashed while street racing.

Terence McNulty, 25, was driving a 2004 Ford Taurus and racing Gerald Howell, 30, who was driving a 2001 Audi A6, police said in a news release, according to WCPO 9 Cincinnati. The two vehicles made contact with each other, which caused McNulty’s vehicle to collide with a Subaru, got off road and over a guardrail. Howell’s vehicle also hit another car after the initial contact with the Taurus.

Police Sgt. Mike Machenheimer reported that McNulty’s 4-year-old daughter was riding with him at the time of the incident. She was taken to Cincinnati Children’s Hospital where she’s being treated with life-threatening injuries.

“She is in the worst shape of everyone,” Machenheimer said. “The other four drivers will be OK, have some injuries but not life-threatening.”

Police originally thought McNulty to be a victim of other drivers racing, but later found out otherwise. The police say the incident is unacceptable. They say the drivers could face charges of of reckless driving, according to Machenheimer. He also said those charges could be upgraded depending on the outcome of the little girl’s condition.

Unsanctioned street racing is never a good idea, but as one Cincinnati man is finding out it could mean the difference in life and death for his daughter.