A legendary racer is behind all of Stewart Haas’ cars 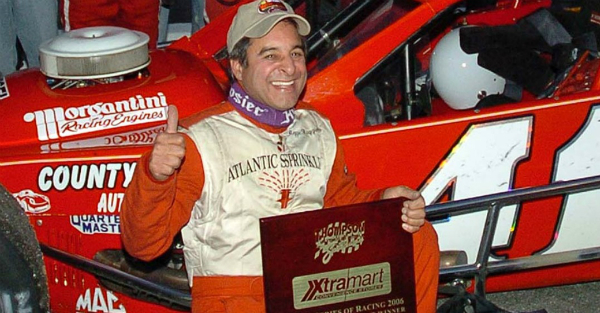 Although he retired from a racing career that spanned form 1968-2012, Reggie Ruggiero still has his hands in racing.

Ruggiero has found place to put his skills to use in the Stewart-Haas chassis shop. He’s a legend when it comes to the NASCAR Whelen Modified Tour, and his name carries weight in the SHR shop. And while most people that name, Reggie isn’t even his real name, according to NASCAR.com.

RELATED: Tony Stewart is bringing back classic racing to Texas

Ruggiero’s first name is actually John, but he was called Ruggie as a shortened version of his last name. Once he arrived to NASCAR, it evolved to Reggie and he’s gone by it ever since.

“Actually, my real name is John, nobody knows me by that, but that?s my real name,” Ruggiero said. “When I was young, we?re an Italian family and we grew up in two- or three-family homes and there were four Johns.”

“Little kids, my cousins, and everybody got a nickname, they just took my last name and shortened it,” Ruggiero added. “Well it was ‘Ruggie’ and then when I started racing, everybody called me ‘Reggie’  and that stuck. I mean, nobody knows me by John.”

He began his racing career at the age of 16, and made quite the name for himself over his 45-year career behind the wheel. But now he spends his days putting a lifetime worth of skills to use for SHR.

“I?ve been in racing since I was 16, so this is a good way to stay in it,” Ruggiero said. “I have people coming into our chassis shop that I don?t know but they know me, it’s pretty interesting.”

“It was pretty hard to swallow, but it?s the way it was,” Ruggiero said. “I always raced to win, not to run for points, sometimes that gets you in trouble, and things like that happen, but all in all for my career, had a ton of fun with a bunch of people.”

Now his fun continues on the racetrack, just not behind the wheel. In addition to Ruggiero (from Connecticut), there are several other SHR team members from the Northeast U.S. and that’s helped him ease into the transition.

Team co-owner Tony Stewart is thrilled to have someone with such an amazing racing pedigree working for him.

“To know his history and know how many races he?s won, he was the guy that, he was a clean racer,” Stewart said. “And now we get somebody who ? it just still amazes me that we have somebody the caliber of Reggie Ruggiero here that?s in our chassis shop, helping build our race cars.”

“That?s something that I think is really cool,” Stewart added. “It really sums up what SHR is really about — it?s about racers that want to go out and win races and win championships.”