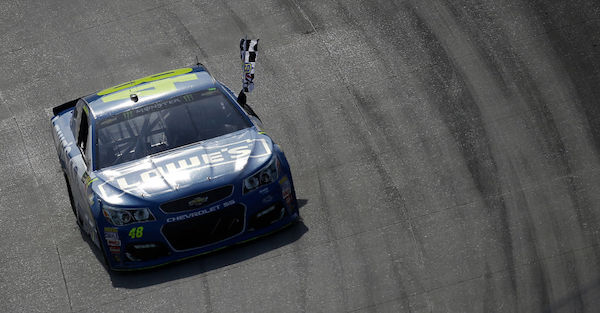 The 2017 NASCAR regular season reached the halfway point on Sunday, and only eight spots remain for the Monster Energy NASCAR Cup Series championship.

The playoffs include 16 drivers in a 10-race, four-stage, elimination-style playoff, and eight drivers have already secured their spots in the playoff field.

The 26-race regular season concludes on Sept. 9 at Richmond, and every driver with at least one unencumbered victory will make the postseason field. NASCAR will then fill out the remainder of the field with the highest-ranked drivers.

Jimmie Johnson’s win at Dover International Speedway on Sunday gave him his third win of the season, which is the most of any driver. Johnson, a seven-time champion, already secured his spot with wins earlier this season.

Related: NASCAR playoffs will finally get the track variety they desperately needed

Kevin Harvick is the highest-ranked driver without a win this season at No. 3, followed by winless drivers Kyle Busch and Jamie McMurray.

If the season ended today, the eight winners would all be in the field, followed by Harvick, Busch, McMurray, Chase Elliott, Hamlin, Bowyer, Kenseth, and Ryan Blaney.

Earnhardt Jr. is in jeopardy of missing the playoffs in his final season unless he wins a race during the second half of the season. He is currently ranked No. 22 in the point standings.