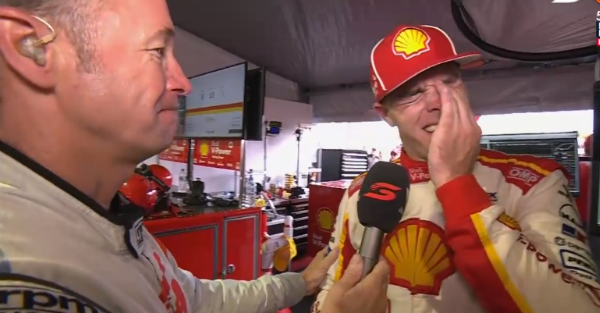 Both of these scenarios happened to Scott McLaughlin at the Newcastle 500. After finishing the race in 11th-place, which was enough for McLaughlin to win the series championship, race officials gave him a 25-second penalty following the checkered flag that pushed him back to 18th. This effectively handed the Supercars title over to Jamie Whincup for the seventh time.

You can't script this.

In total, McLaughlin was penalized three times during the Newcastle 500, but somehow bounced back on lap 90 to pass James Moffat’s car during the final moments of the race for eleventh. However, almost immediately after passing Moffat, fellow competitor Craig Lowndes attempted to pass McLaughlin. That’s when the two cars made contact, sending Lowndes machine into the wall destroying the left-front wheel on his car. This crash also killed the brakes on Lowndes’ machine causing him to crash into a tire wall in Turn 2.

McLaughlin contends that he didn’t intentionally wreck Lowndes and that he was heartbroken coming so close to his first Supercar title only to have it taken away by a post-race penalty.

“I just gave it my all,” McLaughlin said, according to the New Zealand Herald. “I lost my left hand mirror so early. Obviously I knew we were close but I didn’t think we were that close and I just defended my lines at two and then we got interlocked and got caught up and I genuinely didn’t mean to push him into the wall.

“And then to pinged like that ? anyway mate ? whatever.

“It is hard. I just feel sorry for the guys ? we shouldn’t have been in that position.

Things didn’t fall our way today or this year. But I certainly didn’t die wondering.. see you all next year! Thanks to everyone for every bit of support it means a tonne. Congratulations Jamie. #VASC pic.twitter.com/HSAlAlyADb