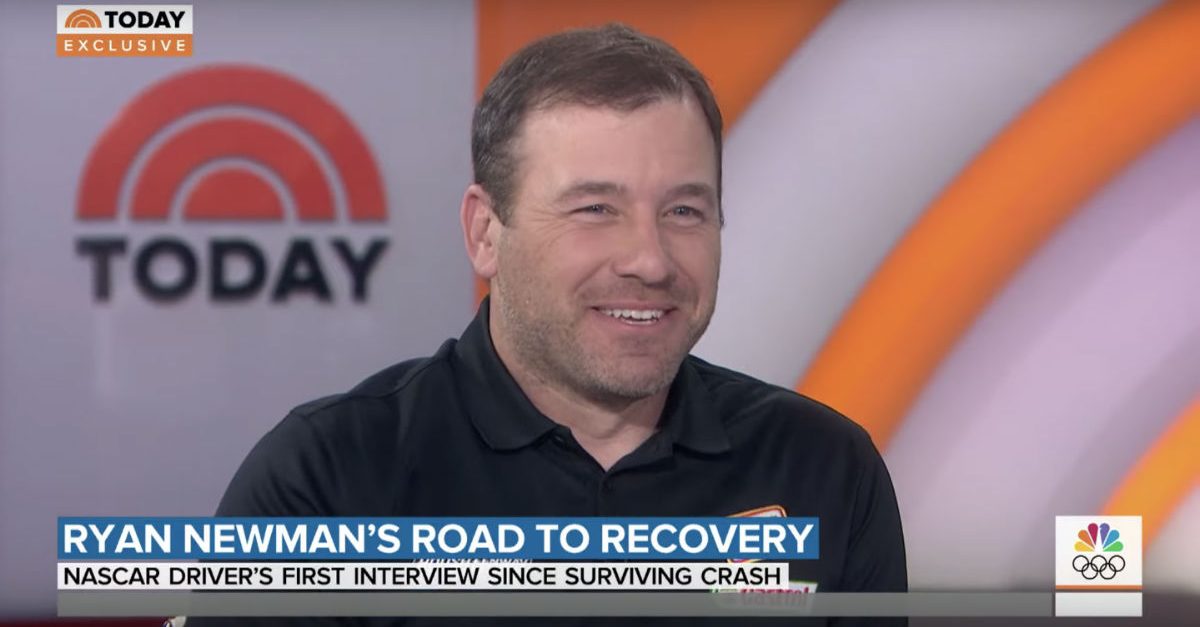 Less than a month after enduring a terrifying crash on the final lap of the Daytona 500, 42-year-old NASCAR driver Ryan Newman appeared on the TODAY show in his first interview since suffering serious injuries in the February 17 wreck.

Sitting down with anchors Savannah Guthrie, Hoda Kotb, and Craig Melvin on Wednesday, the Roush Fenway Racing driver dished on everything from what it was like to survive the crash to when he hopes to make his NASCAR return.

“It’s still humbling to watch (the wreck) and know that I’m sitting here without a headache, which is amazing,” Newman said. “Just a miracle on so many levels, and thankful for so many people for prayers, for all the things that went into me being safer in that situation.”

“The angels aligned and held a really good grip with their hands.”

Following his wreck at Daytona International Speedway, Newman was treated for his injuries at Halifax Health Medical Center in Daytona Beach. While he was knocked unconscious due to the impact, Newman only suffered a “bruised brain,” but no broken bones or other injuries.

Less than two days after being admitted to Halifax, he left the hospital, holding the hands of his two daughters.

Ryan Newman has been treated and released from Halifax Medical Center pic.twitter.com/J0twhGgQm7

“On so many levels, I feel so lucky,” Newman continued. “You look at the crash, you think that’s spectacular in a bad way. You look at the car afterwards, you think about all the things of what happened right for me to be sitting here.”

On when he plans to return to regularly scheduled racing, Newman remained optimistic.

“We’re working on it,” said Newman, who is on his 19th full-time year in the NASCAR Cup Series. “As soon as I possibly can.”

Newman continued, ?It?s been a little bit painful to be out of the race car and to not be doing what I?ve done for so many years. I?ve been racing since I was 4, 4-and-a-half years old. It?s just kind of who I am.?

During the last lap of the 2020 Daytona 500, Newman was involved in a serious wreck after Ryan Blaney attempted to push him to victory. Instead of aiding Newman, Blaney?s bumper caught the back of Newman?s No. 6 Ford Mustang, sending it hard into the wall. Newman?s car flipped and rolled, and while it was in mid-air, it was hit on the driver?s side by Corey LaJoie?s car. Engulfed in flames, Newman?s car skidded into the infield, right as Denny Hamlin won his second Daytona 500 in a row.

Almost instantly, Newman was removed from his car and taken to the hospital for treatment. Several hours after admittance, Newman was reported to be in serious condition with non-life-threatening injuries.

Thankfully, as many current and former NASCAR drivers, as well as fans, pointed out, Newman’s Daytona 500 wreck did not have the same tragic result as the late Dale Earnhardt’s back in 2001.