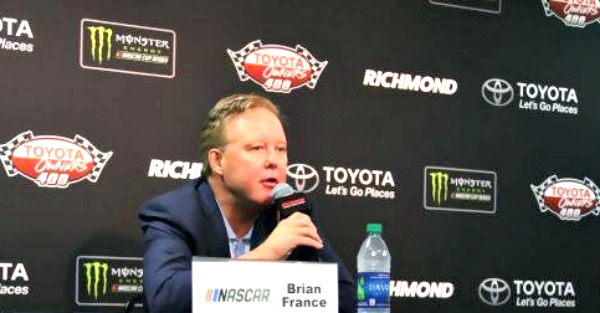 Is NASCAR ignoring warning signs that it’s in big trouble?

ANTHONY BROWN: I don’t think so, even though it seems that way. Yes, if you take Brian France’s comments at face value, it seems like he is totally ignorant to the fact that NASCAR is struggling. But that seems to me like pure PR-Speak. Of course the CEO of NASCAR is going to say everything is fine, to say otherwise could do even more damage to the brand.

Actions speak louder than words, and NASCAR’s actions paint a picture that they are in survival mode. Every move they’ve made has been to cut costs. With big names leaving, sponsorships drying up and ratings falling, the only chance for the sport to survive is if it costs less to operate. They are putting on a brave face, but deep down they know they are in trouble.

RAY MARCANO: No question. NASCAR says it’s in great shape, and is very excited about the future because it has a stable of young drivers that will re-energize the sport and fan base. That’s nice, in theory, but we don’t know (yet) whether fans will take to any of these Young Guns. This is akin to a baseball team that loses its stars and rebuilds with promising young talent. Some of that talent blossoms; others wash out. And, this is happening at a time when the warning signs are cascading like an avalanche. TV ratings are down. Attendance at the track is expected to be down for the 10th  year in a row, and that number alone should scare the hell out of NASCAR. Monster Energy — the sport’s primary sponsor — hasn’t decided whether to re-up. Optimism is fine. NASCAR should talk about how optimistic it is that Bubba Wallace and Chase Elliott can be among that next wave of drivers that can propel the sport forward. It should talk about it’s Drive for Diversity program and its efforts to expand the fan base. But at the same time, it needs to be straight with its fans, acknowledge that it has very challenging issues it needs to face, and tell them how they’re going to fix them.

COLE FREDERICK: Imagine driving down the road and suddenly every light on your car’s dashboard started flashing. The check engine light, the tire pressure light, the engine oil level. Everything is blinking at you telling you something is wrong. Instead of getting your car checked out, you just keep on driving and ignore all the signs of trouble.

That’s basically what NASCAR executives are doing right now. The warning signs are there: ratings declined in 2017 despite a farewell season for the sport’s biggest star in Dale Earnhardt Jr., and now the sport will be without Earnhardt for 2018 and beyond. Danica Patrick also retired, and she has been one of the most popular drivers over the last few years. On top of those two leaving, Matt Kenseth is also retiring, which is a mass exodus for some of the biggest names in the sport.

Sure, there is a considerable amount of young talent on its way up, but that doesn’t help NASCAR right now. The ratings issue figures to worsen next season without Dale Jr. involved. Fans also aren’t likely to want to see another year of Toyotas dominating the sport, and there’s a good chance that happens again in 2018.

NASCAR is at a crossroads, and the sport’s executives are saying publicly that they aren’t concerned and are optimistic for the future. Maybe they’re saying otherwise behind closed doors and have a plan for the future, but for now, NASCAR doesn’t appear to be in good shape moving forward.