Daytona has already produced intense moments that have changed the race 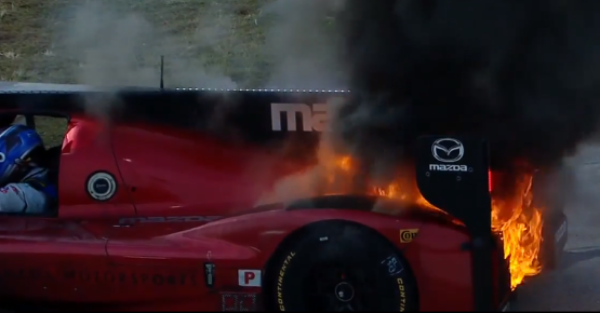 When a race spans 24 hours, racing all through the night in all kinds of weather, with a field of 50 cars, there will be some issues. This year’s Rolex 24 at Daytona has thus far been one of the cleanest races ever, with much fewer yellow flags than anticipated, but that doesn’t mean everyone is getting away unscathed.

Mazda Team Joest’s day ended early when fire engulfed the car. The driver was able to bring the car to a stop and get out unharmed, but the car could not go on.

The Number 38 car bumped the Acura NSX of Katherine Legge and sent her into the grass carrying a lot of speed. Her car went through a billboard and crossed back over the track, narrowly missing the same car that bumped her off.

As the race winds down in its final hours, it is likely some more carnage will follow. As it stands now, Cadillac leads the prototype class and a pair of Fords are up front in the GTLM class. A strong showing for the American manufacturers in the opening race of the American motorsports calendar.

Related: The race at Daytona this weekend will make history