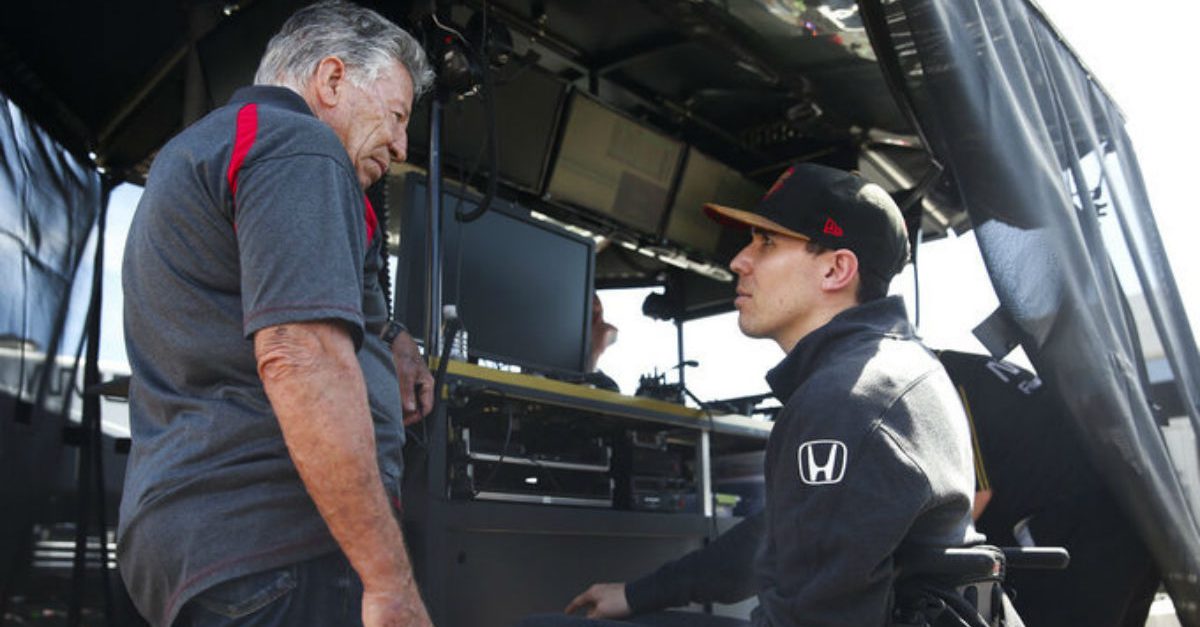 ST. PETERSBURG, Fla. (AP) ? His psychologist has warned Robert Wickens to consider the worst possible scenarios as he recovers from a spinal cord injury.

Wickens prefers to think only about the day when he is no longer in a wheelchair and able to race cars again.

“There’s a mental aspect that I’m still having a hard time accepting,” Wickens said Friday in an interview with The Associated Press. “When I see a chair, I want to sit in that chair, I don’t want to sit in my wheelchair. Right now, I feel like it’s purely just a temporary transportation system until I get something better. But when I look into my future, I will not accept me being in a wheelchair.”

Off to St.Pete! I love trying new things! There was no accessible way onto the jet so we tried waking up the stairs! Got it first try… #teamwork #spinalcordrecovery #SCI #FirestoneGP pic.twitter.com/ISLGtHoRyO

Wickens returned to a race track Friday for the first time since his horrific August crash during an IndyCar race at Pocono. The Canadian suffered a thoracic spinal fracture, spinal cord injury, neck fracture, tibia and fibula fractures to both legs, fractures in both hands, a fractured right forearm, fractured elbow, four fractured ribs and a pulmonary contusion.

His spinal surgeon warned him it would likely take at least six months to develop any feeling or motor function in his legs. On Thursday, he made a point to walk up the steps of the plane he boarded to take him to St. Petersburg.

“Here we are at six months and I have what I have,” Wickens said. “I think it’s hard to complain, but with the progress that I’ve made, I find myself complaining really often because of how badly I want it and how hard I’m working for it. I don’t want this. I don’t want to just recover. I want to be the best spinal recovery in the history of spinal recovery.”

“I don’t want to just walk. I want to walk where there’s no noticeable differences. I don’t want a foot drag, I don’t want anything. I’m treating this as strictly a business project for myself and recovering is my job.”

Read More: IndyCar Drivers Are Rooting for Robert Wickens as He Continues Recovery

Wickens has two major goals for his recovery. He wants at least one dance at his September wedding, and he adamantly wants to race again. He is certain he will compete again one day, no matter how his recovery progresses, because of technology and hand controls.

But Wickens wants to come back at the same level he was at before his accident, which ended a dream rookie season for the IndyCar newcomer. He grew up racing with James Hinchcliffe and the Canadians became close friends, and it was Hinchcliffe who pushed Arrow Schmidt Peterson Motorsports to hire Wickens last season.

He spent most of his professional career racing touring cars in Europe and was an unknown when he turned up at St. Pete last year as the quiet guy seated next to Hinchcliffe in the driver autograph session. But Wickens won the pole for his debut race then led all but the final two laps ? he was spun from the lead by Alexander Rossi and denied his first victory.

The encouraging debut was followed by four podium finishes and he was sixth in the standings at the time of his accident, a budding star for the series. Despite missing the final three races of the season, Wickens still earned IndyCar’s top rookie award.

Yesterday was 6 months since my accident. I’ve known I could do this for a week or so, but I wanted to surprise @itsKarliWoods ! One of my goals through this recovery is to dance at our wedding in September. This was a massive confidence boost that my goal could become a reality. pic.twitter.com/uLljFZ37XP

“I think back to like my autograph session one calendar year ago where no one knew who I was and everyone was like talking to James and the fans just took my card because I was right beside him and they felt sorry for me or something,” Wickens said. “The whole season just went so well, the whole year was almost too good to be true. I’m still mad that I didn’t get to finish it.”

Sam Schmidt, the quadriplegic owner of the race team, has promised a car for Wickens when he can return. Schmidt has been a resource for Wickens during the recovery, and Wickens has come to understand that no two spinal cord injuries are the same. There is no timetable to follow and he really doesn’t know if or when he will be out of the wheelchair.

He relocated to Colorado to be closer to a rehabilitation facility, where he puts in six hours or more of work six days a week. His diet is stricter than when he was racing, and his fitness level has also increased.

I’m coming to St. Petersburg!! I can’t wait to be back in the @indycar paddock. I’ll be doing a meet and greet Sunday at 10am at the firestone display in the fan village, as well as the indycar autograph session Friday at 12:30. I look forward to seeing everyone around the track! pic.twitter.com/chhS5n10hQ

Wickens, who will turn 30 next week, believes his success in IndyCar was only going to continue and it is his intent to pick up where he left off when he does return.

“I want to end my career on my own, and I’m at the best level of my career to date and I was only going to get better and I feel like it was just taken away,” Wickens said. “Mentally that’s been the hardest thing for me to overcome because I want it when I come back. I want to come back as I was pre-injury. I don’t want to come back as someone that’s just there, but back racing like I need to and challenging for wins and podiums.

“If not, I think I’ll just be so frustrated because my whole life I’ve always been competing for wins. I feel a great passion for this sport but I have an even greater passion for winning.”