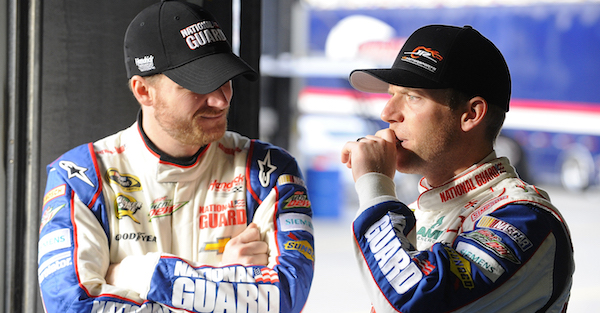 Perhaps the most infuriating thing to happen to drivers vying for a victory late in a race is when the caution flag comes out for a wreck between drivers several laps behind.

A late caution involving drivers with no chance of winning can change the outcome of a race. If the leader is low on fuel and a caution comes out for the 34th-place driver, it could cause the leader to pit and lose the race.

NASCAR driver Regan Smith presented a solution to possibly fix that problem. He said once a driver is down five laps, they should be forced to call it a day and head to the garage early.

Lots of comments about backmarker cars crashing on here, perhaps it’s time for a -5 laps rule? Once your 5 down go ahead and park it.

Related: Two spots at Homestead get locked up in a dramatic finish at Texas

Kenny Wallace agreed with Smith’s assessment, and he said this is a rule NASCAR officials should consider to put drivers five laps behind “out of their misery.”

I believe this should be a conversation in #Nascar. It would put a lot of people out of their misery. https://t.co/Ghfxx52pI7

If NASCAR officials decided to enact that rule, it would almost certainly negatively impact lower-tiered teams that don’t have the same budgets as the bigger teams.

Usually the cars who are lagging behind are from smaller teams, so a rule penalizing drivers for being five laps behind might force smaller teams to shut down. It also might shrink the field from 40 to possibly 35 or less.

So, while it’s easy to understand where Smith and Wallace are coming from, NASCAR officials might not want to make that drastic of a change if it means less cars on the track on race days.