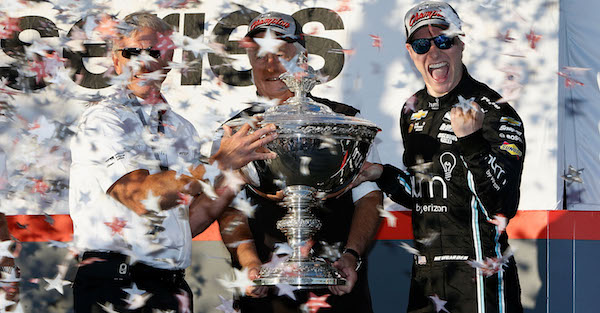 Lachlan Cunningham/Getty Images
SONOMA, CA - SEPTEMBER 17: Josef Newgarden of the United States driver of the #2 hum by Verizon Chevrolet celebrates with team owner Roger Penske after bing presented with the Astor Cup for winning the 2017 Verizon IndyCar Series on day 3 of the GoPro Grand Prix of Sonoma at Sonoma Raceway on September 17, 2017 in Sonoma, California. (Photo by Lachlan Cunningham/Getty Images)

IndyCar’s new unified aerokits will provide teams with a challenge heading into the 2018 season, and Team Penske drivers believe the change will help them next year.

Will Power and Simon Pagenaud are both looking to add another championship to their resumes next year for Team Penske, and Power told Motorsport that the team is “just scratching the surface” of what they’re capable of with the new aerokits.

“Honestly, we?re just scratching the surface at the moment,” Power said. “And we?re taking some really big swings at it, trying to work out what settings do what to the car, how much difference they make, and then trying to figure out what?s the best compromise for each track.”

Related: Series champion said one recent change to the sport will create a ?massive? shift

Power did admit that the weather and track conditions will play a big factor in races due to the aerodynamic change.

“That?s one thing we know: the car?s going to be very susceptible to weather and track conditions because the floor is so much more powerful now,” he said. “That?s where we?re getting the majority of the downforce and on a hot day, you?ll lose a lot of downforce. I mean, this car?s harder to drive anyway ? it takes a lot of finesse and it?s difficult to be consistent, because of this big shift in aero when you brake.

“But then you add to that how tough it?s going to be to chase track conditions and keep up with the changes in temperature throughout a day. It?s going to be very hard every weekend.”

Pagenaud agreed and said there will be an adjustment period for drivers. But he said every driver will be in the same situation, so there will be a lot of unknowns for the field next season.

Team Penske has three of the last four champions in the IndyCar Series with Power (2014), Pagenaud (2016) and Josef Newgarden (2017). While every team is going through the same changes, Team Penske drivers should be the most confident given their recent success.