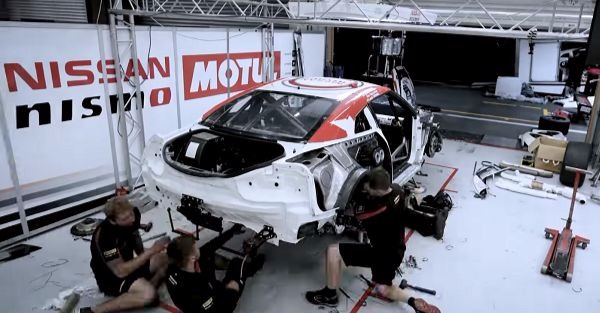 Sure, the 2017 Spa 24 Hours may have taken place in July, but that didn’t stop Nissan from releasing a 22-minute video that documented the brand’s participation in this year’s endurance race.

If you watched the event live, then you already know the two Nissan GT-R race cars finished 13th and 30th, respectively. But, what you might not have seen is all of the work it took to rebuild the No. 22 Nissan GT-R NISMO after it crashed into the wall just hours before the race.

“We fortunately had brought a spare chassis, which was all piped up, plumed up, and wired up, but the rest if it had to be built from spares that we were carrying or pieces off the crashed car,” said Team Manager Bob Neville.

With only 41 hours before the race’s scheduled start, the NISMO team was able to strip the engine, body panels, and other mechanical parts from the car, then install new machinery, insert a twin-turbo V6 engine, and test the car’s important components in only 12 hours, according to report by Motor Authority.

This hard work allowed driver Matthew Parry to compete in the Spa 24 Hours in the very car he wrecked while preparing for the race.

“Getting back in that car felt a bit strange,” said Parry. “To jump in that car after I crashed into Eau Rouge at 100mph.

“As my dad would like me to say it’s the same as golf, isn’t it? You have to forget about your last swing, if it’s a bad one that is.”

The full documentary on Nissan’s involvement in the 2017 Spa 24 Hours can be seen in the video above.