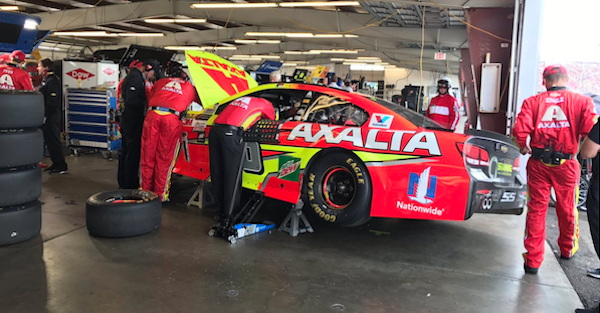 The @AxaltaRacing team is done for the day.

Earnhardt’s day came to an end early in Stage 2, and it was the seventh time this season he has failed to finish.

Another disappointing exit for the 8️⃣8️⃣ of @DaleJr. pic.twitter.com/lgYaYXqcvG

Earnhardt said his team had to make multiple changes to his car throughout the week, and it was a difficult week for him before his final race at Watkins Glen.

“We changed this car inside and out twice this weekend,” Earnhardt said. “We had made it better. We were kind of hanging in there. I think we had a shot at maybe a top 20 at best. But we showed up and we were about four seconds off.

I sure have enjoyed racing here, and I really appreciate the fans here, the track, the staff. They treated us so good every time we’ve been here. So it’s been a blessing.”

Earnhardt only has four more chances to qualify for the postseason starting next Sunday at Michigan International Speedway.