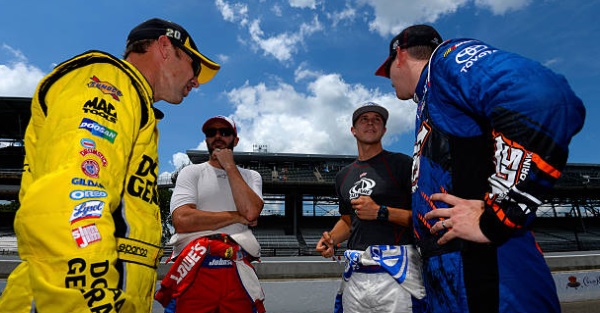 Kyle Busch is nothing if not opinionated, but his logic picking the Super Bowl winner sure is screwy.

NBCSports.com asked several NASCAR drivers who they think will win between the Patriots and Eagles. While several either went with the favorite Patriots or said they didn’t care for either team, Kyle Busch seemed to play both sides.

?I?ve got to go with the Eagles. They?re putting up points, man. I?m a Patriots fan, second to my No. 1 (Denver) Broncos. But if I had to choose one, I think the Eagles are pretty tough right now,?? said Busch.

So it sounds like Busch is going with the Eagles, but the Patriots are his favorite team. Voting against your team takes some guts. Some New England fans may have something to say to Busch when he visits New Hampshire or Dover.

While Busch’s pick is a bit wishy-washy, Ty Dillon is making it very clear who he doesn’t want to win.

“Unfortunately Eagles fans, I know that you?re going to hate me for this but I don?t really care for you. I was at the Monday Night Football game that the Panthers played in Philadelphia and every single one of you fans treated me like trash so I have no love for your fan base ? and I hope you lose the Super Bowl,” said Dillon.

Ouch! Almost to a man, though, the drivers expressed admiration for Tom Brady, marveling at what the Patriots quarterback has been able to accomplish.

?Tom Brady is pretty tough to beat. The guy just keeps coming back and getting more. He?s like Jimmie Johnson,” said Austin Dillon.

?I?m pissed off at the Patriots. I?m over the Patriots. Even Jimmie Johnson gave us a breather. Give us some time to get over it and then we might root for you again. But the dude (Tom Brady) is so good. I?m not excited about the Super Bowl because he?ll win,?? said Clint Bowyer.