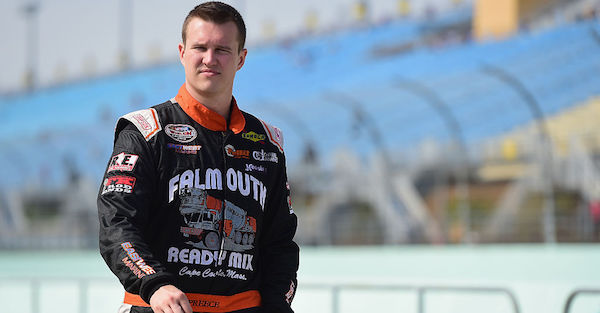 Ryan Preece’s second-place finish in his Xfinity Series race at New Hampshire impressed his team at Joe Gibbs Racing, as well as those he was competing against.

He has one more chance in the No. 20 car for Joe Gibbs Racing in the Xfinity Series at Iowa Speedway on Saturday, and the race won’t include any Cup Series drivers.

RT if your excited for our 2nd race together! pic.twitter.com/NGGIO1CkuQ

Related: One of NASCAR?s brightest young stars is switching teams in 2018

He ran in 33 races in the Xfinity Series last season with JD Motorsports, but he didn’t have the success he was hoping for in 2016. Dale Earnhardt Jr. gave him some advice, and he told him to try and join Joe Gibbs Racing, even for a deal that didn’t include many races.

“I learned that I?m just not somebody who is just going to settle, to just be there” Preece said via NBC Sports. “I?m not about being just part of the show. I want to show everybody, more prove to myself that I can do this. Not that I don?t think I can, but I want to show everybody else too. I feel like I need that opportunity and I finally got it (with Joe Gibbs Racing).”

Check out his 🎨 scheme below👍 pic.twitter.com/ndXTBbP0EO

Preece said he realizes this might be his last chance to make a name for himself, but he doesn’t feel any pressure heading into his race at Iowa.

“I believe in myself, and I knew that if could get the right opportunity and be a part of something like that it could go exactly the way I felt it could go,” he said.

“When opportunity doesn?t knock, you?ve got to knock the door down.”

Preece said this will give him a chance to find out if he’s ready to compete at the highest level of the sport, and he said he is leaving his chances “up to fate.”

“That will tell us if I was meant to do this or not at a bigger level,” Preece said. “My goal is to go out there and show the world what I feel I can do and that?s hopefully winning races at this level.”