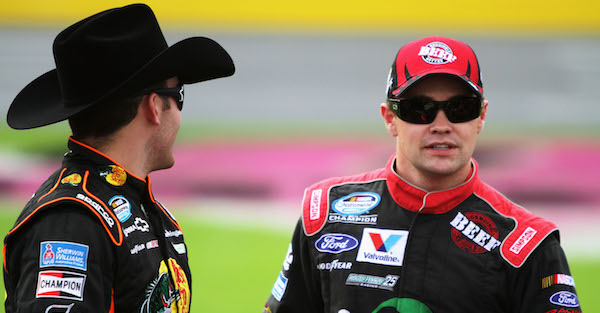 Two postseason races down, eight to go. Martin Truex Jr. and Kyle Busch have already punched their tickets to the Round of 12, and four drivers will be eliminated after next week’s race at Dover.

After last week’s race, the bottom four drivers were Kurt Busch, Ricky Stenhouse Jr., Kasey Kahne and Ryan Newman. Newman, Busch and Kahne remain in the bottom four, but they are joined by Austin Dillon this week. Stenhouse would just barely make it into the next round.

Related: Big names facing elimination if they don?t improve after the first playoff race in Chicagoland

Dillon was at the center of a multi-car crash that involved five playoff drivers and several other drivers during the second stage of the race. Dillon collided with Kevin Harvick, and several cars collided into them which resulted in the racetrack being flooded with smoke.

Kurt Busch and Harvick headed to the garage early after the collision, and it was the worst possible outcome for the elder Busch.

Stenhouse also benefitted from Dillon’s mistake, but he doesn’t have any margin for error heading into next week’s race at Dover.

Four drivers will be eliminated after next week, and then there will be three races before four more drivers are eliminated.

Next week’s race at Dover should provide plenty of drama. Jimmie Johnson won earlier this season at Dover, while Truex won last fall in the postseason.