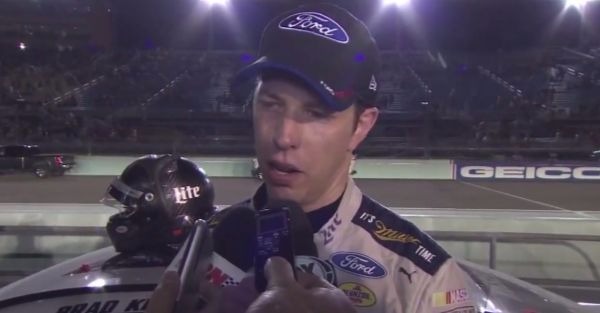 One veteran crew chief has been suspended by NASCAR for violations that occurred at Homestead, but it’s unlikely that he’ll ever serve the suspension.

That’s because Jason Ratcliff was already switching teams in 2018. This past year, Ratcliff served as Matt Kenseth’s crew chief in the Cup Series, but will transition to the XFINITY Series next season where he’ll have the same position with Christopher Bell’s No. 20 team.

For what it’s worth, Ratcliff’s one race suspension in the Cup Series came as result of two lug nuts that were not installed properly on the No. 20 Toyota Camry. This was a violation of sections 10.9.10.4 of the NASCAR Rule Book. Ratcliff must pay a $20,000 fine as well.

Brad Keslowski’s team was also penalized this week by NASCAR and it wasn’t for Keselowski’s continued criticism that NASCAR gave the Toyota teams an unfair downforce advantage over the competition. Instead, his crew chief was fined $10,000 after NASCAR officials discovered a lug nut was not properly installed on the No. 2 car during post-race inspections in Miami, according to NASCAR.com.

Two unsecured lug nuts for Kenseth, one for Keselowski in post race inspection

While both crew chiefs will have less money to buy Christmas gifts this year, these penalties won’t have much effect on their teams in the long run.

Members of both teams are on a hiatus from NASCAR competition until Feb. 18, 2018, when the Monster Energy NASCAR Cup Series drivers reconvene for the 60th Daytona 500.

While Brad Keselowski signed a contract extension earlier this year with Team Penske and is scheduled to drive the No. 2 Miller Lite Ford at Daytona, Kenseth is out of a ride after being replaced in the No. 20 Toyota of Joe Gibbs Racing by young gun Erik Jones.