NASCAR officials are looking to make changes to the overtime line 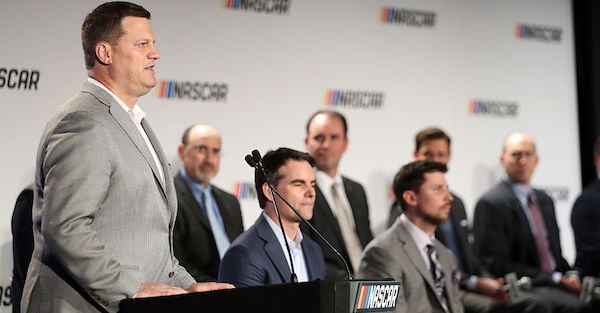 NASCAR’s overtime line was implemented before the 2016 season, but NASCAR officials are already looking into tinkering with the rule.

Executive vice president and chief racing development officer Steve O’Donnell told NBC Sports’ Nate Ryan during the NASCAR on NBC podcast that they are looking to move the overtime line to the start/finish line next season.

“We?re going to take a hard look for 2018 of making (the overtime line at) the start/finish line,” O’Donnell said.

The idea of the overtime line was created by drivers after a finish at Talladega in 2015 where Kevin Harvick and Trevor Bayne were involved in a crash to end the race.

“All those things, if you take the time and you put it up on a board and say what are the positives to this, there are not a ton of them,” O?Donnell said. “So I think if we get it back to the start/finish line and make sure the fans at least get that one full lap, that?s a direction we want to go.”

Dale Earnhardt Jr. was instrumental in helping develop the rule, but even he admitted on Periscope on June 4 that NASCAR should perhaps do away with the rule.

“I kind of helped come up with that idea, so this is going to be kind of strange, but I think they should get rid of the overtime line at all the racetracks except for Daytona and Talladega,” Earnhardt said.

It doesn’t look like the overtime line is going away, but some necessary changes are coming next season.