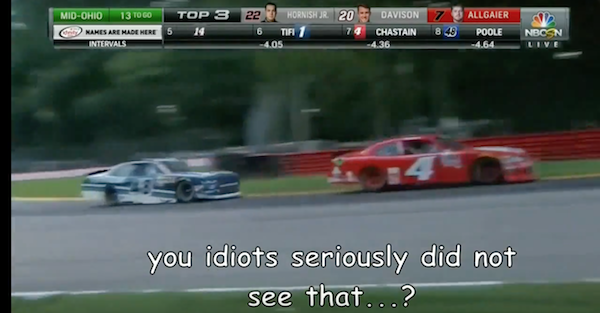 NBC covers the sport during the last half of the regular season, and its coverage has been met with criticism with fans for a variety of reasons.

Related: Some NASCAR fans are angry about NBC?s broadcasting team

One fan decided to make a video consisting of several mistakes the NBC broadcasting crew made during a recent race at Mid-Ohio, and let’s just say the viewer might have a point.

The announcers missed several wrecks and big events in the race, and they seemed thoroughly confused as to why certain drivers had disappeared from the top 10 of the race.

NBC didn’t have a camera following the race leaders, and overall it was just a very confusing broadcast.

Sometimes fans are too harsh on broadcasters, but NASCAR fans might have a point with some of NBC’s coverage.