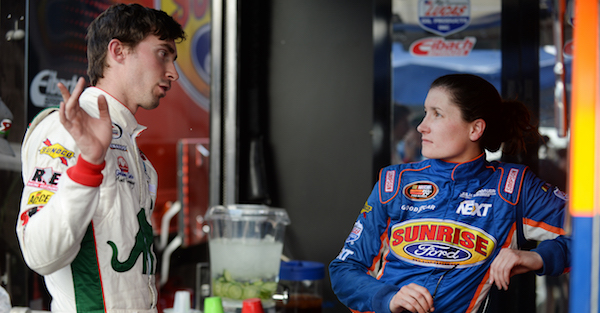 NASCAR teams and drivers are constantly struggling to secure deals with sponsors, and even high profile names like Kyle Larson or Brad Keselowski have difficulty maintaining sponsors each season.

NASCAR driver Julie Landauer, who competes in the K&N Pro Series West, said the sport is missing out on targeting a female audience by not having any female brands as sponsors.

Related: NASCAR is very close to announcing a major deal with a long-time sponsor

Landauer said NASCAR has almost a 40 percent female fanbase, which would surprise most people.

“That’s a huge group of people that are not being catered to,” Landauer said. “Over the past three years, there have been more and more women coming in, so the percentage is growing. It’s just fascinating that we don’t see that kind of femininity in the sport.”

She also said female drivers have to decide whether they want to cater to the femininity or go the opposite direction. She said the female fanbase gives the sport an opportunity to reach out to sponsors who cater to a female audience.

“There’s just a lot of opportunity there,” she said. “Whether it’s from a makeup side, feminine hygiene side, haircare products, there’s so much there.”

Landauer made the point that NASCAR fans are the most brand-loyal in sports. One idea she had was for a tampon brand to sponsor a car.

“Can you imagine the guys chasing the tampon car?” she said, which drew a big laugh from the crowd.

Landauer does make great points, and it’s something for the sport to consider if they struggle to maintain sponsorships. If NASCAR is looking to expand its brand, catering to its female audience would be a good start.