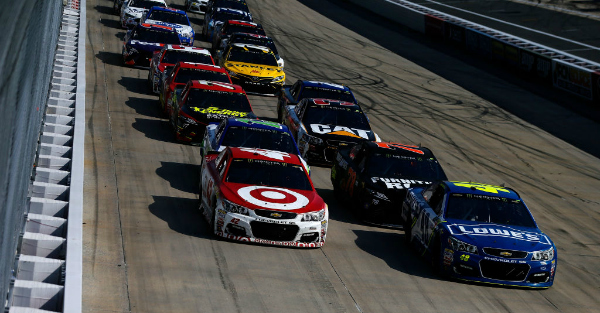 Seven time NASCAR champion Jimmie Johnson and budding star Kyle Larson have found themselves in some heated battles throughout the season.

Some, including Larson himself, seem to think the aggressive racing between the two has turned personal. According to NASCAR.com, after one particularly aggressive block by Johnson at Indy, Larson was overhead on his radio saying, “He hates us. Forty-eight can’t handle it.”

Johnson, however, said he is just out there having a blast racing and that it has nothing to do with any feelings towards Larson.

“I just race people how they race me and it doesn’t matter if it’s Kyle Larson, Martin Truex, Jeff Gordon, Tony Stewart — it doesn’t matter,” he said. “There’s that environment on the track. Through the course of the year, it’s been intense with the 42 at times, so I’ve been able to race him back the same way.

“… The game has changed and I have had nothing personal toward Kyle, I don’t think he’s had anything personal toward me. You just get in that environment of racing people how they race you and then certain scenarios exist where you need to fight for that position for whatever reason and it is what it is.”

Johnson then attributed his aggressive blocking more to the new format of the races than with any particular driver getting under his skin.

“[…] In stage racing today, we have to block and maintain and hold position more than ever,” Johnson said. “And to see the extent that some drivers have gone through — even myself — to hold track position, I said it after Indy, Mark Martin would have a heart attack if he was racing this year.”

Johnson said that NASCAR should be happy with themselves that the new stage racing format has led to more aggressive and exciting driving. But some people still insist to read into a personal dynamic between the two drivers that Johnson insists just isn’t there. In response to some thinking this could be a generational thing, Johnson said:

“[…] I don’t see him (Larson) as a young guy coming in; I just see him as a fast driver, fast car. My head doesn’t go there … The racing again just has changed out there. Spotters have a huge role in today’s racing, telling you exactly where the guy is behind you so you can cut the air off their car, make it more difficult for them. So, there’s just a lot of little things that drive the intensity and frustration up when you’re in a faster vehicle trying to overtake someone.

“For me personally, I don’t see somebody’s experience when I’m staring at their car. It’s really about that moment and how somebody has raced you also comes into play. We’re like elephants out there. We kind of remember things that people might forget otherwise. But, it’s really just a racing thing.

“And Kyle is an amazing talent. He’s going to win many more races and without a doubt, win championships. So, I’m happy to have those heated competitions with drivers out there, including Kyle.”

Whether or not Johnson is taking any of these battles personally, we are all happy that he and Larson are not being courteous to one another on the track. That’s racing as it should be.