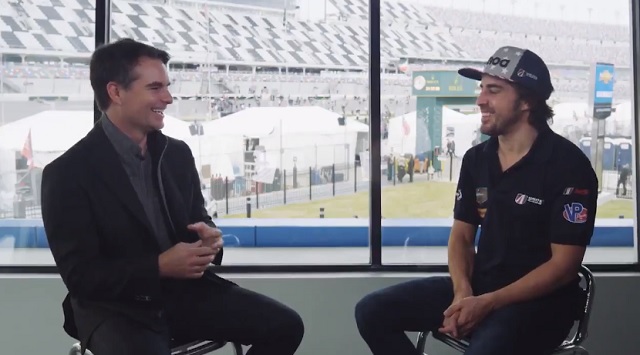 I?ll say this for Fernando Alonso. The champion Formula 1 driver is getting a full measure of exposure while racing here in the U.S. this weekend.

Alonso is taking part in the Rolex 24 this weekend at Daytona, something that?s been a goal of his for a long time. NASCAR legend Jeff Gordon tweeted a short sit-down he had with Alonso where he asked him about some of his other racing aspirations.

?(laughs) Not for a moment. I think it?s completely different,? was Alonso?s response.

During his time at Daytona, Alonso has been asked about as many different ways as someone can if he is entertaining a stint in NASCAR. While it does interest him, the two-time Formula 1 champion says he knows his limitations.

?I would like to test a car, but I think racing and the pushing and strategy, I think that requires a lot of experience and knowledge from a very young age maybe watching races?I don?t have that. I think testing is one thing, I think racing in NASCAR is a big deal.?

If NASCAR is out, Alonso isn?t dismissing trying a race again here in the U.S. He tells Gordon that there are a few other races on his bucket list he still wants to try, starting with the 24 hours of Le Mans.

?Yes, it?s a huge race, along with the one at Monaco, the Indy 500, Le Mans is that race everyone wants to race one day.?