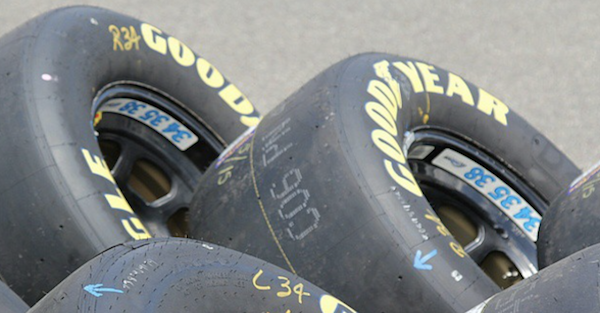 NASCAR’s Monster Energy All-Star Race is about to get a whole lot more interesting.  The addition of a second tire option will be introduced, making for a very sticky situation at Charlotte Motor Speedway on May 20th.

We see this in Formula 1 and Indycar, with teams able to use many different tires depending on the track and conditions that day. NASCAR isn’t going that far, but even one tire option will surely make for a more exciting and unpredictable finish. Just in case the grand prize of one million dollars wasn’t enough.

Goodyear will provide the tires and, although they are the same construction as the standard tire, the compound will be changed to provide more grip. The trade off to a stickier tire is that it will wear out faster thus providing the race team another variable to account for in determining when exactly to use the set. They will only be provided with four tires that must be used all at once at any point in the race.

From Autoweek, Goodyear Racing executive Greg Stucker answered a few questions Sunday at Talladega Superspeedway. He went more in depth on the construction and performance of the tires as well as expectations for the event.

What is the difference from the option to the prime tires?

“The construction itself is the same (for both) the prime and the option. We made formulation changes to both the right side and the left side (to add grip for the option tire.) The left side is actually a known compound. We’ve raced it at Fontana and Indy up until this year and (we’ve raced it) at Darlington.

“It’s a known quantity. We kind of know how it behaves. The right side is a formulation change based off testing we’ve done historically. It’s a known adjustment … to put a little more grip in that tire. It was about getting a little more out of the left side and right side. Again, a known quantity, but it’s a combination we’ve never raced — but we something we know about.”

Are the option tires still three-tenths to half a second faster?

“Yeah, I think it’s in that ballpark. It’s tough to translate that directly from the lab testing with the amount of grip we will see. We still think it’s in the ballpark based on what we’ve done in the past versus the usual differences we see in the lab. It still lines up. I think that time will vary from car to car since some guys will get more out of it, but again, I think we’re in that ballpark range.”

“Guys could probably make it last a full fuel run. Not everybody (could), but some guys can make it happen.”

“It’s softer (and has) more traction. It’s formulated to be that way, hence it’s gonna run hotter. That is one of the factors that, as tires get hot, they provide and lose grip. They give up. So that will be a factor. It’s tough to say exactly how much, but that’s the goal.”

What do you want to accomplish with this tire?

“What I think everyone wants to happen is open the door for more strategy. I think with two different tire options, this is what you’ll have. Some guys, if they struggle in the first segment of the All-Star, you’ll see them try their options in the second or third (segment) in order to advance to the final segment. Other guys with the high average (finishes) will probably save theirs for the final 10 laps. That’s the whole goal — to generate opportunities for guys to take different strategies and not have everyone on the same strategy.

“I think it will give this race some flair, a different personality, where everyone is trying different things.”

No matter what happens during this tire experiment, it’s a great move for NASCAR in general to try and spice things up. Recently, fans have not been sticking around and this, among other stimulating additions to the sport, could provide the extra traction needed to get right back on top in the racing world.  Ok, no more tire puns.

Related: After eight years, a driver struggles back to the track after NASCAR could have crushed him