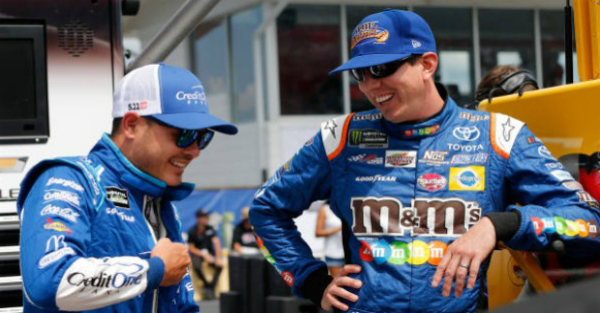 Earlier, we made our picks for the 16 playoff drivers and the order for how drivers would finish 5-16.

Now, we’ll make our pick for who will win the championship this season.

In the playoff article, we noted that we believe the Championship 4 will include Kyle Busch, Kyle Larson, Chase Elliott and Denny Hamlin.

Hamlin just missed out on reaching the Championship 4 last season after Chase Elliott wrecked him at Phoenix. Elliott retaliated after Hamlin wrecked him two weeks prior at Martinsville, and a rivalry emerged between the two. Hamlin might be the most accomplished driver without a championship now, and he certainly has the talent to win the title this season. We’re predicting Hamlin wins three races this year and finishes in the top 5 at Homestead, but he will just miss out on winning the title.

Elliott finished fifth last season despite not winning a race all year. He might’ve won at Martinsville before Hamlin wrecked him, but the 22-year-old is still looking for his first career victory. We think Elliott earns his first victory this year ? along with two more, including a win at Martinsville in October that earns him a spot in the Championship 4.

Related: Chase Elliott took a risk at the Duels, and now he?s reaping the rewards

Busch nearly caught Martin Truex Jr. at Homestead last year, but he fell just short of winning his second title. He had a slow start to the season, but we’re predicting the exact opposite will happen this year. Busch will lead the Cup Series with seven wins on the year ? his first coming at Bristol in April, and he’ll win two races in the postseason. Just not the one that matters the most.

While Truex and Busch dominated most of the season in 2017, Kyle Larson was still in contention for a title before engine trouble doomed him in the playoffs. He won four races last year, and he had seven runner-up finishes. He also finished third at Homestead, and we believe he would have won the race had he been in the Championship 4.

Many believe it’s only a matter of time before Larson, 25, wins a Cup Series title. We’re calling for him to win six races this year, including the season finale at Homestead where he edges out Kyle Busch for the championship.

Let us know who you think will win the title this year. Truex is actually the favorite to repeat according to Vegas Insider with 7/2 odds, and Busch is right behind him at 9/2. Larson has the third best odds at 6/1, while Kevin Harvick checks in at fourth at 7/1.