Rider turns near disaster into the save of the year, and talks about how it happened 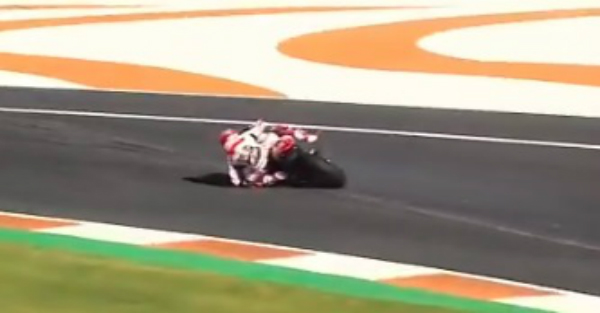 In a moment that could have easily turned tragic and caused serious harm to MotoGp driver Marc Marquez, he managed to avoid tragedy and persevere.

At the season finale in Valencia, Marquez was seven laps away from securing his fourth title, when he lost the front end of his motorcycle, according to crash.net. The only thing that could’ve kept Marquez from capturing the title would be to finish worse than 11th place and if Andrea Dovizioso were to win the race.

When Marquez lost his front end it seemed almost certain that he would bite it and fail to finish at the least. But, somehow he was able to hold on and miraculously maintain control.

In the melee of the incident, Dovizioso and Jorge Lorenzo were crashed out, allowing Marquez to emerge in fifth place. He finished in third place, giving him his fourth championship and fourth in five years.

"People will remember the title for the save!"@marcmarquez93 talks about THAT save at the #ValenciaGP! pic.twitter.com/9mC5K1JjGT

Honda Respol released some intriguing data that showed how close he was to disaster.

As Marquez reached the end of the main straight and braked later than he should’ve by about 90 feet. He took the corner at 95 mph, in third gear. When he lost the front end, the front wheel slid for more than 150 feet and angle of his lean reached 64º, but surprisingly he didn’t go down.

“When I got to the corner I saw that I had entered too fast, but I thought ‘I?ll brake it and I?ll go in’,” Marquez said. “But then, boom, I supported my weight with my elbow!”

“I used my elbow and knee as a level, and I think that with the help of the fans,” added Marquez. “I got the bike back up.”

Since he’s entered the circuit in 2013, he’s pretty much dominated. He’s emerged champion in each season, with the exception of a third-place year in 2015.