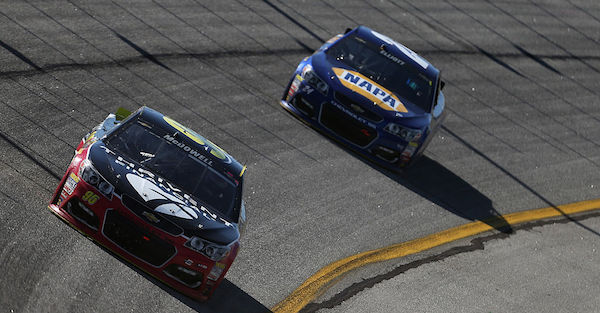 Chase Elliott and Michael McDowell were involved in a crash at the Coke Zero 400 at Daytona International Speedway on Sunday, and Elliott pinned the blame on McDowell for the wreck.

Elliott called McDowell “the biggest dumbass” he’s ever seen via the radio audio scanner, and he said it wasn’t the first time the No. 95 car has caused him to wreck.

McDowell fired back at Elliott on Twitter and claimed that he wrecks himself.

I wonder if @chaseelliott watches the replays and realizes he wrecks himself. That is Twice now. #untouchables https://t.co/Y62TFAowb5

Here’s the video of what happened, but it’s still difficult to tell what happened and what caused Elliott and the No. 24 car to wreck.

Replay: Chase Elliott spins through the grass and collects Trevor Bayne during the #CokeZero400 at @DISupdates. pic.twitter.com/Zki0b0pXau

McDowell went on to finish 4th in the race, which is the best finish of his career. Elliott finished 22nd in a race where 17 drivers did not finish.

Neither driver has won a race this year, but Elliott is currently 6th in the standings and in position to make the playoffs. McDowell is ranked 25th, and he won’t make the playoffs unless he wins a race.

It’s hard to tell who’s really at fault for the wreck, but more fans will probably side with Elliott given that he’s the far more popular driver.