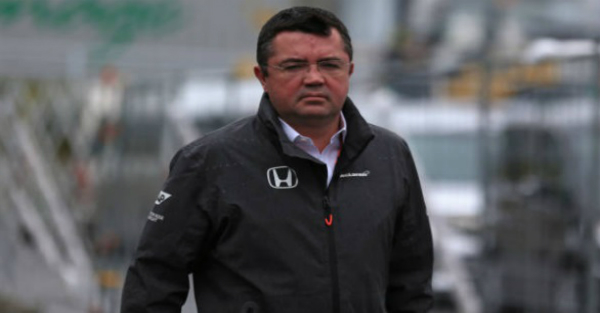 Photo by Octane/Action Plus via Getty Images

A number of people have voiced their criticism of the direction in which Formula 1 is heading and McLaren’s racing director Eric Boullier is one of the most recent.

Formula 1 and its three-engine rule is being heavily frowned upon and Boullier says the rule risks robbing the sport of its identity next season, according to motorsport.com.  Boullier is putting his support behind Red Bull and its effort to get the rule tossed out.

Christian Horner of Red Bull has made several attempts to reverse the decision to further limit engine usage by reducing the engine total to three for the entire season.

Ferrari president Sergio Marchionne made it rather clear that he had no desire to go back on the three-engine limit at this time, when the matter was brought up in F1’s Strategy Group.

Boullier has recently placed his support behind Red Bull.

“For me, it is going too far,” Boullier told motorsport.com when asked about his opinion on the rule. “Too far also because it is not Formula 1 anymore.”

“I am not saying we need 12 engines per race weekend, like 20 years ago,” he said. “But with three engines per season, where is the technology appeal?”

Recently Formula 1 legend Niki Lauda voiced his concern on the direction the sport is heading under its new ownership, Liberty Media. He like, Boullier is worried some of the changes will take away fro the identity of Formula 1.

RELATED: Racing legend worried about the future and takes a shot at the new owners of F1

Only time will tell if the powers that be will be open to the various suggestions of Red Bull, Lauda, and Boullier. For the sake of the sport, we can only hope they do.