Here’s what Matt Kenseth told Dale Jr. after his big win in Phoenix 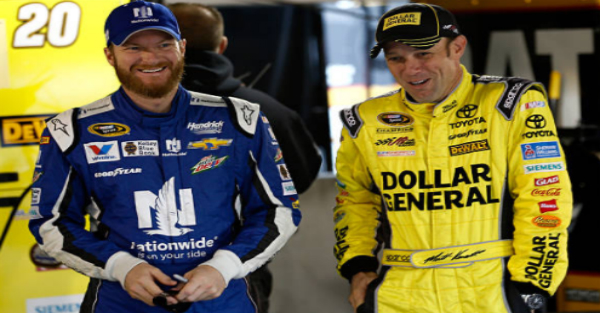 With the sun beginning to set on the fabulous careers of Matt Kenseth and Dale Earnhardt Jr., only one race remains for the two drivers.

Kenseth and Earnhardt Jr. both began as full-time drivers in the Monster Energy Cup Series in 2000. With 65 wins between the two –39 for Kenseth and 26 for Dale Jr., — they’ve accomplished quite a bit. Kenseth won a Winston Cup championship in 2003 and Earnhardt Jr. won back-to-back Busch Series Championships in 1998 and 1999, and he has also been named most popular driver 14 times.

Kenseth made sure to add one more for the road this past weekend in Phoenix and he kept Chase Elliott out of contention in doing so. Elliott passed Kenseth on lap 284 to take the lead, according to Yahoo Sports. But it would be short lived as Kenseth came charging back to take the lead for good, with less than 10 laps left.

RELATED: Former champion wins at Phoenix in what was likely his next-to-last race ever

This was the first victory of the year for Kenseth and how fitting for it to come on one of the final races of his career. After the race Earnhardt Jr. congratulated Kenseth and when he shook his hand, Kenseth said to him, “One for the old guys!”

When I shook @mattkenseth hand after the race today he said “One for the old guys!!” 🤣🤣

RELATED: As retirement approaches, Dale Jr. heaps praise on a rival and friend

The two drivers have been close friends for a long time, it sure would make for a storybook ending, if Earnhardt Jr. could pull off some magic this weekend at Homestead. Giving the two of them the final two wins, in their final season.