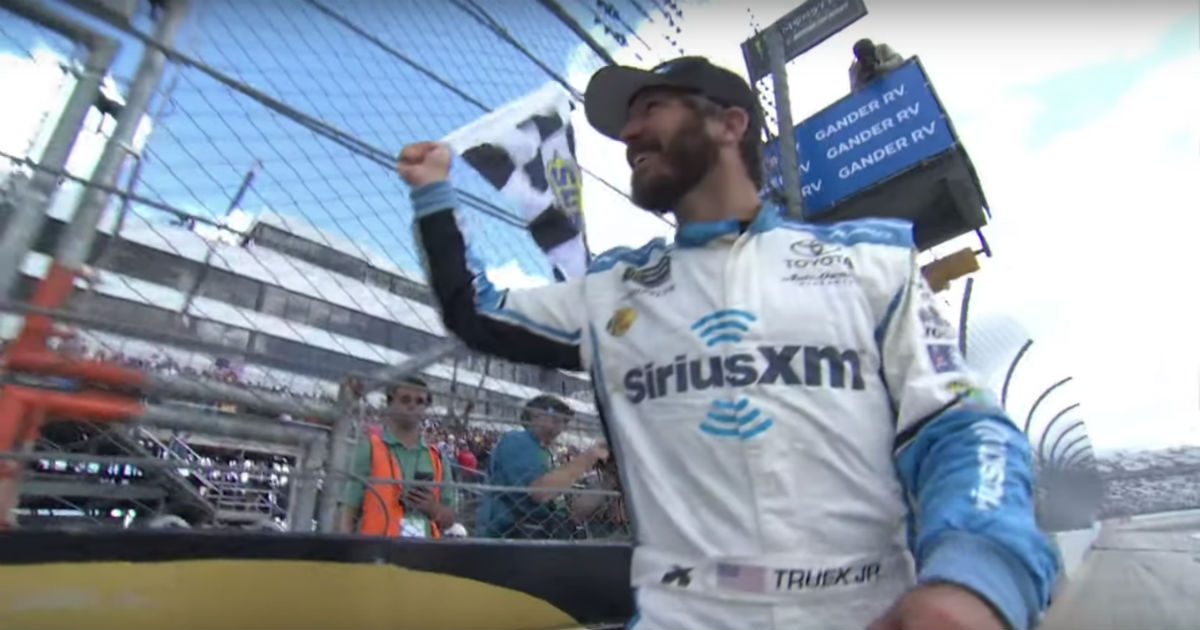 Truex won his first career NASCAR Cup race on June 4, 2007, at Dover and 12 years later used another Sunday rainout to take the checkered flag. Truex, the 2017 Cup champion, won at Richmond three weeks ago and is getting hot in the No. 19 Toyota for Joe Gibbs Racing.

?Coach has put together a good bunch,? Truex said.

Alex Bowman finished second for the second straight week in the No. 88 Chevrolet. Kyle Larson, Kevin Harvick and Chase Elliott rounded out the top five. Elliott gave Hendrick Motorsports and Chevrolet their first wins of the season at Talladega last week. Bowman and Elliott made it another solid race for a manufacturer that was in need of a boost.

?We at least had a shot at it. It?s really all you can ask for,? Bowman said. ?We had a miserable start to the reason. We really did a good job resetting in the off week.?

But all the teams are chasing Gibbs.

JGR has seven wins in 11 races this season and has established itself as the team to beat. Truex, who is from Mayetta, New Jersey, has long considered Dover his home track and he crushed Bowman by 9.5 seconds after starting in the back of the field because of inspection issues.

?I promise, it wasn?t easy,? Truex said. ?It was long work. It was tough. But this race car was incredible.?

Read More: Fresh off Move to Joe Gibbs Racing, Martin Truex Jr. Has His Sights Set on a NASCAR Championship

Truex has been as reliable with crew chief Cole Pearn in his first season with Gibbs as he was for years at the since-shuttered Furniture Row Racing. Truex, who has 21 career wins, made it to victory lane for the first time in 2007 but didn?t win again until 2013. He hasn?t sniffed much of a victory drought since 2015, winning 19 races over that span and a series championship.

Kyle Busch matched Morgan Shepherd?s NASCAR record with 11 straight top-10 finishes in the first 11 races of the season. Busch was 10th for the second straight race. Shepherd reached the mark in 1990 driving for Hall of Fame car owner Bud Moore. Busch started the streak when he finished second behind teammate Denny Hamlin in the Daytona 500. He also has three wins, two thirds, a sixth, an eighth and two other 10th-place finishes to go with his victories during the streak.

Jimmie Johnson holds the track record of 11 victories at Dover, where he finished 14th. Johnson has been stuck on 83 career wins since he last reached victory lane on June 4, 2017, also at Dover.

Work will begin immediately on new $5.5 million garage at Dover that should be ready for the fall race. The current garage area has been in place since the Monster Mile?s first race on July 6, 1969. Among the improvements: 44 garage bays for the Cup cars.

The series shifts to Kansas Speedway, where Kevin Harvick is the defending race winner.

Read More: NASCAR?s Deal with This Sports Betting Group Could Be a Step in the Right Direction