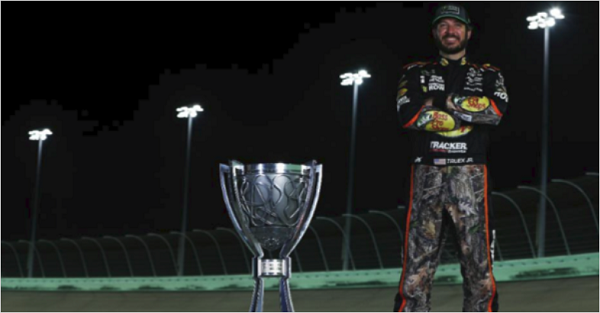 The 2017 season was an interesting one in the NASCAR Cup Series.

From Dale Earnhardt Jr.’s retirement to Kyle Busch and Joey Logano slugging it out on pit road, there was certainly no shortage of fascinating story lines this year.

The creative minds who manage NASCAR on NBC’s Twitter account ran through what they thought were the best moments of this past season, using the #BestOf2017 hashtag.

While some moments were funny, like when Denny Hamlin ran away from a 44-pound lobster after winning at New Hampshire; others were more heartfelt, such as Matt Kenseth’s win at Phoenix in what was probably his second-to-last Cup race.

Taking the top spot on the list was Martin Truex Jr.’s championship-winning performance. Coming into the year, Truex Jr. had a reputation as a journeymen driver with seven Cup victories to his name, but the 37-year-old became one of NASCAR’s elite in 2017 on the strength of eight wins and his first NASCAR title.

From switching race teams to supporting his girlfriend Sherry Pollex, who’s currently battling cancer, Truex’s motto has been to never give up and he reinforced that saying after edging out Kyle Busch in the season finale at Homestead .

“I wanted this since I was a little kid,” Truex said after clinching the Cup Series championship. “Never give up on your dreams not matter what happens (or) what kind of crap you go through.”