Imagine you're Dale Earnhardt Jr., and you're kicking back with NASCAR Hall of Famer Mark Martin. You're sitting in a car, and he turns on the radio. What do you think the Batesville, Arkansas native would play? If you guessed it would be Lynrd Skynrd, Guns N' Roses, or Alan Jackson, well, you'd be wrong.

Back in 2017, Martin was four buses down from Earnhardt for Daytona 500 Speedweeks and said he had something to show Dale Jr. So, Martin called him over to a new Roush Mustang and had him sit down. Earnhardt thought he'd been called over to check out the new ride. But, to his surprise, Mark started playing Gucci Mane.

As in the Alabama-born rapper, born Radric Davis, responsible for such hits as Icy, Freaky Gurl, Wasted, and Lemonade. Let's just say, the guy's not someone you'd expect on your average NASCAR driver's playlist even nowadays, not to mention on the playlist of someone who raced in the old school days of the sport. But, hey, that's Mark Martin for you.

Scene: Daytona 500 speeedweeks.
Mark Martin is 4 buses down and waves me over.
?got something you need to check out?
Has me sit in a new Roush Mustang.
Thought he was showing me the car. Nope
He starts blaring @gucci1017 out the speakers. https://t.co/ZesJWHKq9K

If it's not what you expected, you wouldn't be alone. Dale Jr., NASCAR Xfinity driver Landon Cassill, and many others were taken by surprise as well.

Read More: Looking Back on the Daytona 500 and One of the Most Controversial Finishes Ever

To confirm his Gucci Mane fandom, Martin even tweeted out a few song recommendations, after being asked by a fan.

Start with Mr Davis and Everybody Looking ? @gucci1017 Listen to them 5 times. They will grow on ya the more you play em. https://t.co/TShkIf7zHr

Apparently, Martin ended up earning himself some street cred and OG status after the revelation of his musical choices.

As it turns out, Gucci Mane is also quite the Mark Martin fan. Earlier in 2017, Gucci had congratulated Martin on his induction into the NASCAR Hall of Fame.

Now, at this point, you may be asking yourself, "If Mark Martin's such a big Gucci Mane fan, then what's his favorite song?" You better believe he's got an answer to that one! 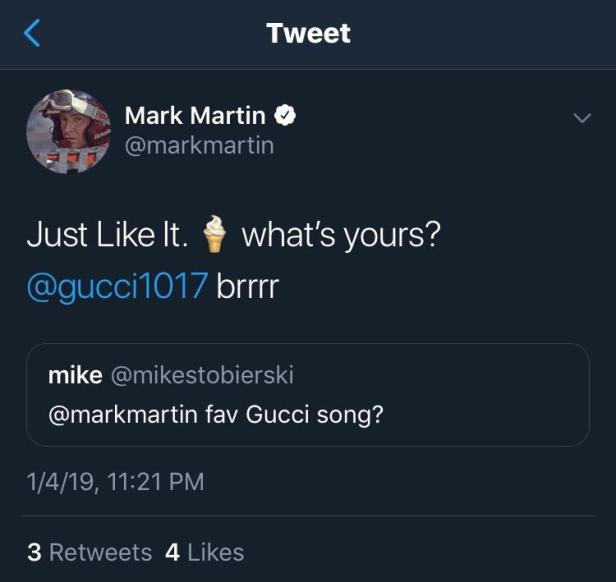 WATCH: Dale Jarrett's Net Worth: How Much Is the Racing Legend Worth?