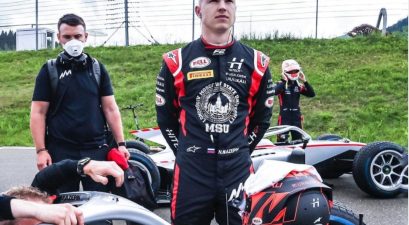 Dale Earnhardt Jr. has had plenty of reasons to celebrate during his life. As a two-time Daytona 500 winner and 15-time Cup Series Most Popular Driver, the former NASCAR driver (he still races every now and then) had an illustrious career on the track. He’s also the owner of JR Motorsports, is a NASCAR commentator on NBC Sports, has a successful podcast in the Dale Jr. Download, and runs a number of other business ventures.

With an estimated net worth of $300 million, Junior is definitely living the life. So, what do you get a guy who pretty much has everything?

Well, back for Dale’s 45th birthday on October 10, 2019, his wife Amy got him an incredible gift for the big day: a portrait of his dad, the late Dale Earnhardt. You can see in the below picture that Dale and Amy’s daughter Isla especially seemed to enjoy the painting of Grandpa.

Wife got me this amazing piece of art by @seanwales for my birthday. Isla loves it too.

“Wife got me this amazing piece of art by Sean Wales for my birthday,” Dale Jr. wrote in the caption. “Isla loves it too.”

For an early birthday celebration a week prior, Amy Earnhardt also took Dale to the Thirsty Beaver Saloon, a dive bar right around where the Earnhardts live in Charlotte, North Carolina.

My wife took my to the Thirsty Beaver Saloon last night for my birthday. I’m ashamed to say it was my first time there. I love dive bars and this one checks all the boxes. #goodtimes #divebar #jukebox #countrymusic #coldbeer

Considering what the Earnhardts went through less than two months before Dale’s big 4-5, it was great to see the family in such good spirits. On August 15, a private jet carrying Dale, Amy, Isla Rose, and the family dog Gus was involved in a bounced landing at Elizabethton Municipal Airport in Elizabethton, Tennessee.

The plane caught fire, but thankfully, no one was injured in the plane crash. Needless to say, it was definitely a terrifying experience for the entire family. Fortunately, they were able to put all that behind them and can enjoy celebrating even more birthdays together.