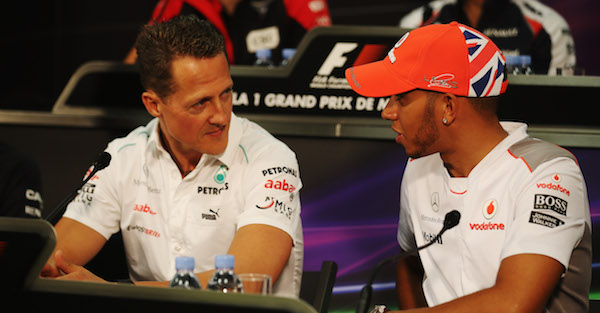 Clive Mason/Getty Images
during previews to the Monaco Formula One Grand Prix at the Monte Carlo Circuit on May 23, 2012 in Monte Carlo, Monaco.

Lewis Hamilton just captured his fourth career Formula 1 championship, and he joins an elite group of drivers have have won at least four titles in the series.

Hamilton tied Sebastian Vettel and Alain Prost with four championships, and he’s now one behind Juan Manuel Fangio, who won five titles in the 1950s. But the ultimate measuring stick is Michael Schumacher, who has the F1 record with seven championships.

However, Hamilton said he doesn’t have the desire to chase down Schumacher’s record and break it, which would require four more championships.

“I can’t see it at the moment ? four more titles,” Hamilton said via ESPN. “You can imagine, it’s taken me 10 years to achieve this point. I don’t currently have that desire to match it.

“Matching Fangio would be cool and being that I’m going to be here for at least a couple of years more, that’s my goal ? to at least get that.”

The 32-year-old isn’t sure how much longer he’ll race, and he is expected to stay with Mercedes at least through 2020.

“I don’t think when I’m older the amount of titles that I have is going to define who or what I am as a driver. I think how I’ve worked with the team, how I drive the car and what I extract from the car, that for me is what I feel inside defines me.

“Who knows… when I was younger I thought I’d have a family at 28 and when I got to 28 it all shifted. It’s difficult to say never, maybe in a couple of years I might say ‘Jeez, I’m going to go another ten years!’ I really hope that’s not the case because I’ll be with you guys [the media] when you’re all in zimmer frames!”

Hamilton is clearly the top driver in the sport right now, and he could probably come close to tying and passing Schumacher if he decided to race for several more years. But it’s unclear how much longer he’ll be in the sport, and he’s already in elite company.

But if Hamilton wins again next year, it might be difficult for him to not try and break Schumacher’s record.